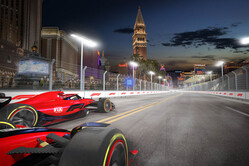 The date for Las Vegas' return to the F1 schedule has been revealed in a letter to the city's Convention and Visitors authority.

Though F1 boss, Stefano Domenicali confirmed last week that the 2023 schedule will not be revealed until October, a 17-page letter to the Las Vegas Convention and Visitors Authority which was leaked on social media - and since substantiated - reveals the event will take place on 18 November, a week before the Thanksgiving holiday.

Furthermore, the race, which is being promoted by F1 itself and Liberty Media, has a 5-year contract, with the event due to be held on the same weekend for the duration of the contract.

Though unconfirmed, and seemingly flying - no pun intended - in the face of F1's desire to plan the calendar by region in order to reduce travel back and forth across the globe, the race could form a back-to-back event with the season ending race in Abu Dhabi.

Domenicali also said that the planned schedule is likely to consist of 24 races, though it is now understood that South Africa will not be included.