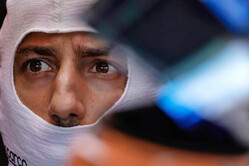 Multiple sources are claiming that Daniel Ricciardo heads into the summer break aware that he is currently without an F1 drive for 2023 after McLaren appears to have signed countryman Oscar Piastri.

Since Tuesday's flurry of activity there has been a telling silence, not helped by the fact that the impending two-week shutdown allows for those involved to drop under the radar.

Nonetheless, numerous sources are now claiming that McLaren has agreed a deal with Piastri which leaves Ricciardo looking for an alternative seat.

Despite the team's denials the writing has been on the wall for some time, and though Zak Brown subsequently 'clarified' the original comments he made about Ricciardo not living up to expectations the doubt has remained.

More surprisingly however, is the volte face from Andreas Seidl who has constantly insisted that the team was sticking with Ricciardo. It is now suggested that the German was involved in early talks with Piastri's manager, Mark Webber, with whom Seidl worked when he was running the Porsche WEC programme.

Though Alpine is sticking to its guns claiming it has a legal claim on Piastri's services, if and when the matter goes before the contract Recognition Board it is likely it will find in the driver's favour as his contract had to be agreed by 31 July. It wasn't.

Indeed, it was the day after that Aston Martin announced the signing of Fernando Alonso, the move which kick-started the saga.

Adding to the mystery is the claim that Piastri signed for McLaren on 30 July.

The most likely option for Ricciardo is a return to Alpine (nee Renault), though Haas and Williams have been mentioned in recent days as many anticipate a major game of musical chairs over the summer.

Speaking exclusively to Speedcafe over the Hungarian Grand Prix weekend, Ricciardo admitted that he needed the summer break more than ever.

"I definitely think I'm in a different headspace," he said, when asked about his mentality compared to this time last year. "But with that being said, I think a break is, even if you don't think it, I think it's always valuable."

Indeed, fully refreshed after a difficult start to his maiden season with the Woking outfit, Ricciardo went on to win the Italian Grand Prix.

"It's just nice to, even if you're kind of flying at the moment, I think a break is still nice and even just to let yourself reset, recover mentally, switch off, all these things. So, I'm looking forward to it.

"I guess it hasn't been the first half of the season I wanted," he admitted, "but I'm also just handling it better I think than last year. I'm not screaming for the break, but I'm certainly going to enjoy it and I think it will be again useful for me."