"It was a disaster for me," says Leclerc 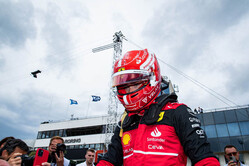 While fans of a certain vintage have grown used to seeing the prancing horse shooting itself in the hoof, drivers Charles Leclerc and Carlos Sainz are slowly begin to see it for themselves.

If ever one needed an example of snatching defeat from the jaws of victory, today's Hungarian Grand Prix was a perfect example.

At a time rivals, Kevin Magnussen and Fernando Alonso were seeking to get off their hard tyres as soon as possible, Ferrari opted to put Leclerc, who was leading the race, on to the white-banded rubber.

Struggling on the hards, as other had done so before him, Leclerc suffered the indignity of being overtaken by Verstappen twice, the second time after the Dutchman had spun.

In the final stages of the race, now under attack from Lewis Hamilton, Leclerc was forced to make a third stop, thereby dropping him to sixth.

While Ferrari does its best to keep a lid on things, to wash its dirty linen behind closed doors, it was hard for the Monegasque to hide his frustration at race end.

"We need to speak with the team and understand the thought behind putting the hard tyre on because I felt very strong with the medium," he told Sky Sports.

"Everything was under control and for some reason, I don't know why, we went on the hards," he added.

"I said on the radio I was comfortable on the medium and I wanted to go as long as possible on those tyres because the feeling was good. I don't know why we took a different decision.

"Honestly the pace on my side, I was pretty happy," he insisted. "The only thing is obviously everyone will remember the last part of the race where it was a disaster for me, especially with the hards.

"That's where I lost the race basically. I lost 20 seconds with the pit, another six seconds on five laps on the hard because I was just all over the place on the tyre.

"We'll speak about it inside the team and how to get better."

Meanwhile, across the garage, teammate Carlos Sainz, who finished fourth, believed a podium was thrown away due to two poor pit stops.

"We have been decent on pit stops all year but it is true that now and then there are a couple of pit stops that are failing us and we need to analyse what we can do better and be stronger in the second half," said the Spaniard.

"I don't know what we could have done better on strategy," he admitted, "but I can tell you when the pace is bad like today the strategy is always difficult because if you don't have pace with any compound you are always going to struggle with strategy because you have very little flexibility.

"The pit stop cost me twice today and it swapped my second stint because from probably leading the race I went to P3 and having to manage the tyres a lot, which is a shame but do you include that as a strategy? I don't know.

"I think today we were just slow and I think if you compare our pace to the Red Bull on Friday against the Red Bull today there was clearly something in the car and the tyres that we were just not doing right."

Super quick on Friday, today's cooler temperatures, while suiting the Mercedes, worked against the Ferrari.

"We clearly struggled as a team," said Sainz. "We are a bit puzzled because we expected to have really good race pace but it is clear in these lower temperatures the track condition changes.

"We obviously had something going on with the car and the tyres that we were not fast. It's something to analyse, to look back and regroup and see what we did wrong for this kind of conditions and come back after summer break with a better package."