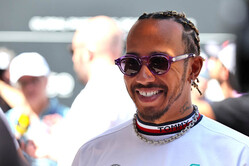 Ahead of a potential showdown with the authorities, Lewis Hamilton has removed his nose stud for the British Grand Prix weekend.

Earlier in the season, with new race directors on board, the FIA clarified the long standing rules relating to jewellery, a move that immediately drew the seven-time champion's ire.

At Monaco, the original deadline, the ban was delayed for a further two races, Hamilton having previously stated that if the rule was enforced he was ready to accept a ban.

Speaking on Thursday as the Silverstone weekend got underway, when asked about the jewellery ban, Hamilton replied: "With all due respect, it's kind of crazy to think that, with everything that's going on in the world, that is a focus for people. I would say it's worrying that we've got so much bigger fish to fry.

"We've really got to start focusing on other more important areas," he added. "I will be racing this weekend, I will be working with the FIA.

"I would say the matter is not particularly massively important."

However, TV coverage on the opening day of the race weekend revealed that the Briton had removed the controversial nose stud at the centre of the row.