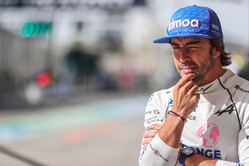 A self-confessed super-fan of Fernando Alonso, Nico Rosberg says it is the Spaniard's political machinations that have prevented his achieving even greater success.

Form the moment he stepped into the Minardi back in 2001, it was clear that Fernando Alonso was a very, very special talent.

However, while the likes of Sebastian Vettel went on to win four titles and Lewis Hamilton seven, those two, back-to-back titles in 2005 and 2006 are the yardstick of the Spaniard's success.

While it is often joked that Alonso leaves a team just as it is on the cusp of achieving success, few ponder why he has felt the need to change teams so often and so suddenly.

McLaren was the perfect example. The reigning world champion was signed by Ron Dennis and partnered by British hot-shot and GP2 champion, Lewis Hamilton.

From the outset, the Briton was more competitive than anyone, perhaps even McLaren, had envisaged, and suddenly Alonso's superiority was under threat.

Next minute, the sport was facing one of the biggest scandals in its history, Alonso essentially having threatened to 'spill the beans' on what was to become ‘Spy-gate' unless he maintained outright number one status.

The rest, as they say, is history.

With Ferrari he was runner-up three times, but again the Spaniard was making enemies within the team with his political machinations, only, to everyone's surprise, to return to Woking for the much anticipated second coming of the McLaren-Honda partnership.

Totally disillusioned by that little episode, Alonso set his sights on motorsport's Triple Crown, and having won at Le Mans targeted the Indy 500, almost pulling it off at the first attempt.

Since returning to F1 last year, the Spaniard has repeatedly shown signs of that old magic, offered proof that given the right car he can still mix it with the best of them.

However, after Sunday's Canadian Grand Prix, having failed to nail Max Verstappen at the start as promised, the Spaniard was hampered by an engine issue, poor strategy and finally a penalty that saw him end the day in ninth.

Not content to accept this as his lot, Alonso began to question why there are only issues with "car 14", suggesting bias towards teammate Esteban Ocon within the Alpine team.

It is this political manoeuvring, according to Nico Rosberg, that has prevented Alonso achieving greater success.

"I am a big fan of Alonso at the moment, says Rosberg on Sky Sport's Any Given Monday. "We all know that talent and skill-wise he is one of the best of all time.

"He sometimes lacked that social competence," the German adds, "he often had difficulties to be in the best teams with the best cars because they didn't really want him anymore because of burning bridges in the past.

"That was definitely one of his weaknesses in his career in terms of getting even better results, but in terms of talent he is surely one of the best of all time or right up there."

41 next month, Alonso is seven races shy of equalling Kimi Raikkonen, another no nonsense legend, as the most experienced F1 driver of all time.

"For him to still drive like this is just so cool," says Rosberg. "I was so gutted for him," he adds, referring to Sunday's Canadian GP, "I wanted him to be on the podium. I think Alpine did a little mistake, they could have taken a jump into the pitlane.

"He is driving so awesomely there shouldn't be any discussion that he is taking up anyone's seat. He more than deserves to be where he is.

"It's super spectacular the way he is driving, the fans all over the world are loving it and he is a great asset to the Alpine team."