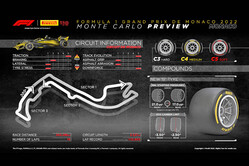 Just one weekend after the hardest tyres in the Pirelli Formula 1 range were selected for the Spanish Grand Prix, the softest compounds make an appearance for the most glamorous track of them all: Monaco. The C3 is the P Zero White hard, C4 is the P Zero Yellow medium, and C5 is P Zero Red soft.

Like Barcelona, Monaco is extremely well-known to the teams: just one of three circuits still on the calendar that originally appeared in the inaugural 1950 Formula 1 season. Unlike the other two (Spa and Silverstone) it hasn't changed shape significantly since then, which means that it has the lowest average speed of any track and very little run-off, making it notoriously difficult to overtake on.

The slippery street asphalt (which is opened up to traffic each evening) and slow speeds mean that the energy going through the tyres is low, with minimal wear and degradation, but quite a high degree of track evolution each day. All this means that a one-stopper is the norm in Monaco, but there's quite a wide pit stop window and the timing of the stops can be influenced by safety cars, which are very likely around the tight confines of the circuit.

The cars run a special high-downforce configuration for Monaco in order to maximise grip at low speeds, with combined grip generated both mechanically from tyres and aerodynamically from downforce. This is obviously the first time that the new generation of 18-inch Formula 1 cars has raced at Monaco though, so the teams will have a lot to learn about how they react in these unique conditions, with the weather on the Mediterranean coast sometimes hard to predict at this time of year.

Mario Isola: "Monaco is often described as one of the most unpredictable races of the year, but the truth is that qualifying takes on a particular significance as track position is key here. As a result of that, understanding how to maximise the softest C5 compound - which has only raced at one event so far this year, in Australia - will be a vital part of free practice. With the previous rule requiring drivers to start the race on their fastest Q2 tyre now abolished, we might see some different strategies this year, with some drivers picking harder compounds to begin the race to target running a long first stint, given the difficultly of overtaking. Others may choose a more traditional approach by starting on the softest compound, at a race where strategy can make a real difference."