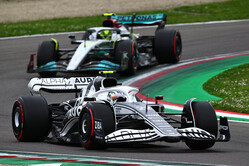 Yuki Tsunoda: "I'm happy with how today went; I had a good start and gained a few positions there, which I think was the turning point for my race because the start really is key here in Imola. After that, the car seemed good, I liked the set-up and how the car behaved so was able to trust it and gain another position. The pace was better today but it's still not that strong, compared to the cars around us, so there's still some performance to find with this package. Obviously, we've still got some work to do to get into the points tomorrow, but we'll work hard tonight to get ourselves into a good position and we'll see how the race goes."

Pierre Gasly: "This weekend is not going the way we wanted. Zhou didn't give me much space, it's not a great place to be side-by-side, and unfortunately there was contact, but that's just the way it is sometimes. After that, the car suffered some damage and it wasn't easy. If it could rain tomorrow, that would be great for us, as I think with our current performance we will struggle a bit, the straight-line speed just isn't there this weekend. We'll really look at the strategy tonight and try everything we can tomorrow to move forward."

Jody Egginton (Technical Director): "The balance of both cars on both the soft and medium compound was fairly good in FP2, so in terms of preparation for the race we had covered as much ground as possible and had a good read on the tyres. The other variable going into the race was the weather, with some forecasts suggesting a risk of rain for the race start. This did not manifest itself, so the tyre call was straight forward, with the Softs being the preferred option for ourselves and the majority of the other runners. In terms of our performance in the Sprint, the grid positions we had with both cars following a suboptimal Qualifying meant the race was always going to be harder than it should have been. However, Yuki made good progress to finish 12th, battling the Mercedes pretty much the entire race. His progress was of course positive, but it also leaves us wondering what would have been possible, had we achieved the Qualifying positions we were capable of. Pierre has had a tougher race, having contact with the Alfa Romeo on the first lap, meaning he had to stop for tyres and a front wing change. This dropped him to the back of the field and forced him to try and fight back through the field. Although Pierre passed both Williams, and showed a good pace, he ran out of laps to make further progress finishing in a train of cars. Our focus now shifts to tomorrow's race, where we need to ensure the tyre learning from today is well applied in order to get both cars moving further up the field again. It won't be easy, but the pace shown today is positive and the target of getting into the points is clear."