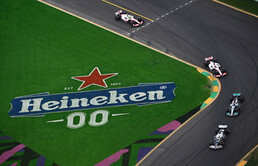 Pierre Gasly: "It's always disappointing to miss out on Q3, but I think this weekend has been tough for us. We saw that McLaren and Alpine have made a step forward, we just didn't have the pace to do much better. We know what we need to work on and we've planned some upgrades in the coming races, but to miss Q3 by a tenth of a second is always painful. We've managed to improve on some areas, but some issues just remained throughout the weekend, so it's a bigger picture we need to look at. I think we did what we could, I don't think Q3 was on the cards today. It's going to be a long race, there could be some mistakes made by others, so I need to keep focussed and make sure to see the chequered flag."

Yuki Tsunoda: "It was hard but there was potential to be in the top 10. Between Q1 and Q2 I lost performance from the car and it just felt different, the rear was gone and I struggled to adapt to it. I went off track in one of my runs and impeded Pierre, which I apologise for. We have to see what happened, hopefully we can put everything together and score points in the race."

Jody Egginton (Technical Director): "After a reasonable Friday, where both cars were not too far away from the pace, we made some changes overnight and had a decent FP3 with both drivers being pretty competitive. There was some fine-tuning made ahead of Qualifying, and although the Qualifying sessions went OK, we came up slightly short and couldn't make it to Q3. The margins are small, but we just were not able to sneak in, which was disappointing. We will go away and focus on the developments coming through and re-target getting the car back into Q3 from race four onwards. Now our attention turns to the race and looking at what strategy options we have available tomorrow. Overtaking isn't easy here, but we'll see what we can do to score points like in previous races. I think we can finish in the top 10, it's just a case of moving the cars forward as early as possible in the race and see if we can consolidate from there."