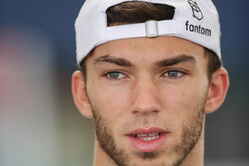 Mindful of having lost former proteges Daniel Ricciardo and Carlos Sainz, Helmut Marko is fearful of losing Pierre Gasly should Red Bull not promote the Frenchman to its team.

Having made his F1 debut with Toro Rosso in 2017, Gasly was promoted to its sister team in 2019. However, on failing to match the pace of teammate Max Verstappen, the Frenchman became yet another victim of the Austrian outfit's harsh demands for 'instant' success and was demoted back to Toro Rosso midway through the season.

Since the demotion Gasly has flourished, and has understandably attracted the attention of a number of rival teams, the Frenchman demonstrating his ability on numerous occasions, not least his victory at Monza in 2020.

While Sergio Perez has upped his game at Red Bull, many fear that unless Gasly is given another chance at 'the big team', the Frenchman will follow the example of Ricciardo and Sainz and move elsewhere. Indeed, former Toto Rosso co-owner, Gerhard Berger, recently said it was time to give Gasly another shot.

"Gerhard is right," Helmut Marko tells Formel1.de, "but at the moment we still have a contract with Checo.

"We have to compare the performance of these two drivers, and with Checo we still have until the middle of the year," he adds. "With Gasly we still have a contract until 2023, and it's already clear that if this contract expires and we can't offer him a chance to move up, we will most likely lose him, and we don't want that."

Meanwhile, despite Max Verstappen's win at Jeddah on Sunday, Marko fears that the RB18's weight is going to prove a handicap as the season progresses.

Since the start of pre-season testing a number have teams have admitted an inability to get down to the minimum weight, which this season is increased by 38kgs.

According to Auto Motor und Sport, the Red Bull and Mercedes are both 15kg over the minimum, Ferrari 10 kg and McLaren and Haas 5kg.

"The changes to the safety related regulations, in order to meet, to pass these tests we're having to add mass and structure to the chassis," explained AlphaTauri's technical director, Jody Egginton at the Barcelona test.

"On top of that, geometrically the regulations have changed with regard to the minimum sizes of some elements of the chassis," he continues, "so the cockpit volumes... etc... etc... so the thing's physically larger in some respects. Put those two things together, and you're adding mass to the structure."

However, an added problem is the budget cap which sees the teams limited to spending $140m this year. For with a title fight that might well go down to the wire, the likes of Red Bull need their money for the updates required to beat Ferrari and Mercedes.

"It's much more difficult to get off the weight because of the cost cap," admits Marko to Formel1.de. "You have to calculate more precisely where technical progress, where weight reduction and reliability can be found, these three components, and then you have to find the right compromise.

"But one thing is clear: you certainly won't be able to drive at the front of the field this season if you're overweight," he adds.

The one team that appears to have got things right and is close to the minimum is Alfa Romeo.

"From the information we have, and especially how vehemently they were against adding weight, it's safe to assume they do," says Marko.

"Supposedly they also have a shorter wheelbase," he adds, "I can't judge, but together with the Ferrari engine, that explains the performance they currently have."