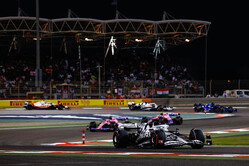 Yuki Tsunoda: "I'm quite happy with today, especially with the start as I was able to make up a few places. I had a little bit of luck near the end, as some cars had failures, but overall I'm pleased with how today went. We've still got a lot of work to do to be able to fight consistently at the top of the midfield, but we're confident that we can develop the car to continue to improve our performance. We'll go away and analyse the data from this whole weekend to try and find what our main limitations are ahead of the race next week."

Pierre Gasly: "This is not the start to the season I was hoping for, the whole car just switched off outside of turn one, and then I started to smell the burning. It's such a shame as I had a really good start, I was able to pass Fernando, then Kevin when I got the chance, and we were running quite comfortably in P8. We lost some important points, but there's still lots of positives to take from today. I was quite surprised with the pace and it's looking pretty good for the next few races. We obviously need to understand the failure we had but I'm sure we'll find a solution. I had some good battles, it was fun to be back racing and I'm looking forward to next week already."

Jody Egginton (Technical Director): "Both cars have been quite competitive in the midfield tonight and were able to deliver strong performances, moving forward during the race, which is good to see so early in the season. Pierre was looking on course for a very strong race before his issue, which was instant and without any warning. Unfortunately, the safety car which followed Pierre's stoppage went against Yuki, who had just boxed. This provided some cars around him with an opportunity to stop for free, meaning he was a bit further back when the safety car came in. However, some strong laps in his last stint saw him come home in P8, which is a good result for him and the team considering the less than ideal weekend Yuki had here. The competition in the midfield is looking very tight, and with the first weekend under our belt we now have a clearer picture on where we need to focus our attention to improve the AT03 in the coming events. We are looking forward to the challenge."

Franz Tost (Team Principal): "Today's exciting first race was a good start to the 2022 season. I think that the new regulations delivered what was expected, as we saw a lot of overtaking and the cars are much closer together, like it used to be in the past. Congratulations to Ferrari for this fantastic one-two. Unfortunately, Red Bull Racing, who were fighting for the win, could not finish the race, which was also the case on our side with Pierre. We still don't know what the reason for his failure was, but the rear of the car caught fire. This was very disappointing, as he had just 12 laps to go and was sitting in eighth position at the time. Pierre started the race in P10 with a used set of soft tyres, he had his first pit stop on lap 13 for the Mediums, and then we decided to call him in once again on lap 32 for the Hards to go to the end. Pierre did a really good job today and had everything under control; he was very good at managing both the tyres and the fuel consumption and his car seemed to work very well.

"As for Yuki, he started from P16 but he was already P12 after the first lap, and thanks to several good overtakes he was soon P11. We called him in on lap 15 and changed to the Mediums. Yuki did a fantastic job defending his position and putting pressure on the cars ahead of him. We then decided to go for a three-stop strategy, so on lap 29 for his second stop we moved to the Softs. He was able to overtake Alonso and had a good fight with Ocon, and even if after the safety car he wasn't able to overtake him, Yuki drove a really good race, without any mistakes. We struggled a little in Qualifying, but in the race the car showed quite a good performance, so I think we would have deserved to finish with both cars in the points today. Now we have to find out what the reason for Pierre's retirement was and prepare everything in the best possible way for Saudi Arabia, which is already next weekend. We hope to finish with both cars in the points there."