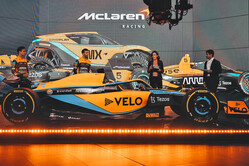 As McLaren becomes only the second team to reveal its 2022 contender, technical director, James Key admits that certain "bits and pieces" have been hidden.

The Haas renders last week and this week's Red Bull were to all intents and purposes 'show cars', the official F1 'prototype' with a livery for the purpose of getting the show underway.

Thankfully, Aston Martin and McLaren have been a little more honest, just like at this option revealing the 'real thing', and in the Silverstone's-based outfit's case taking to the track to give up a first glimpse of the 'look of '22'.

With such a huge overhaul of the regulations it is understandable that teams will not want to show their cards at the outset, though offering a 'dummy' car is somewhat underhand for a sport ever repeating that "it's for the fans".

While McLaren has revealed a 'proper' car, technical director, James Key is the first to admit that all is not what it seems.

"We can be proud of presenting a real car, because it absolutely is the car we will be taking to Barcelona," he said in the moments after the car was (finally) revealed.

"We have hidden some bits and pieces," he admitted, "because there are some sensitive areas for obvious reason, but everyone will see them anyway when we run the car.

"But as far as the development plan is concerned, like every team we have development steps to come early on because we are still very much in the learning process at this stage and the development rate and the proactivity we are showing in the next step is pretty strong.

"So we will bring some updates to Bahrain and then the next step is already in process now, so you will see the car change. But I'm sure everyone's car is going to change

"With our car, and I'm sure everyone has done this, we have made an effort to try and give ourselves a platform which is very well future-proofed for development, so it offers opportunities beyond us getting the here and now right. We'll see how that goes, but there is plenty more to learn and do at this stage.

"I think it then drops down to what your development strategy is in terms of introducing things and the longer you leave something," he adds, "the quicker the car will be when you've got it on, but you've spent more races without that performance step.

"I think that's what the cost cap forces you to do, which is a good thing because you have to think smartly and you have to think about the most efficient way to do things. Having worked in smaller teams in the past, this is familiar territory for me and I don't mind taking that decision because it goes with the territory."