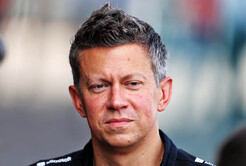 "Alpine F1 Team and Marcin Budkowski, Executive Director of Alpine F1 Team, announced today their decision to end their collaboration as of January 13th 2022," said the team in a brief statement.

"Laurent Rossi will temporarily ensure the team's management to allow everyone to focus on the next season's preparation."

"I truly enjoyed being part of the leadership team of Renault then Alpine F1 Team, working with such a talented and dedicated group of people," said Budkowski. "I will be watching the team's progress fondly in the seasons to come."

"I would like to thank Marcin Budkowski for his commitment and contribution to the team's results over the last four years," added Rossi. "The team is fully focused on getting the car ready for the first race in Bahrain and deliver a step beyond in performance."

The Pole, whose F1 career began with Prost in 2001, subsequently spent six years with Ferrari as aerodynamics team leader, before joining McLaren. In 2014 he joined the FIA as 'Task Force Leader'.

His surprise move to Renault in 2018 was strongly objected to by a number of rival teams fearing that his knowledge would give the French team an unfair 'insider' advantage.

The suddenness of this latest move makes one wonder if it is connected with the ongoing investigation into the events at Abu Dhabi, and whether Budkowski is returning to a senior role at the FIA, possibly replacing Nikolas Tombazis whose future is understood to be in doubt as part of the fall-out from the Abu Dhabi/Michael Masi affair.

Indeed, prior to his move to Renault it was widely thought that the Pole might make a good successor to Charlie Whiting.