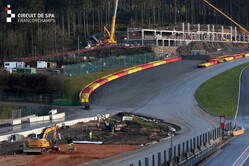 As work continues on Turn 8 and Blanchimont at the majestic Spa-Francorchamps, officials have released images of progress at Eau Rouge and Raidillon.

The top of Raidillon (Turn 4) will see the current tarmac run-off enlarged on the right side of the track, while the lower part of the section (Turn 3) will also feature a larger tarmac run-off.

A covered grandstand is being erected at the top of Raidillon for the end of April, comprising 4,600 places and VIP boxes.

Meanwhile, at Eau Rouge, the barriers will be moved to allow enlargement of the run-off.

The work, which got underway in the middle of November, is intended to obtain the double FIA/FIM official approval required to allow the return of motorcycle endurance to the iconic track, and forms part of an overall strategy aimed at the diversification of activities and the modernisation of its infrastructure.

Change at Eau Rouge and Raidillon has been mooted for some time, but while purists didn't want to see the DNA of the iconic section compromised, a number of serious accidents in recent years have forced organisers hands.

As previously reported, the run-off at La Source corner is being enlarged and a gravel trap is being placed there. Also, the 24hr grandstand is being replaced with a more modern grandstand, better integrated with its environment.

Also, at Les Combes and at Malmedy (Turns 6 and 7), the run-off is being enlarged, the barriers moved and the tarmac replaced by a gravel trap. New service roads will also be put in place.

The Belgian Grand Prix is scheduled for 29 August.