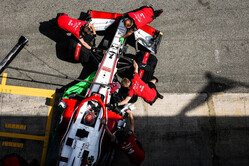 Alfa Romeo Racing ORLEN delivered a strong performance in qualifying for the Brazilian Grand Prix, with both Kimi Raikkonen and Antonio Giovinazzi placing their cars in Q2. The two Alfa Romeo Racing ORLEN drivers claimed starting positions in the top-15 for tomorrow's sprint qualifying, with Kimi in 14th and Antonio in 15th place at the end of Q2.

Tomorrow's sprint, the final such session of the season, will define the final grid for Sunday's Brazilian Grand Prix, where the team will be aiming to score points for the third time in five races.

Frederic Vasseur, Team Principal: "We were able to put two cars in Q2 for the second week running, which is a positive, and to start in 14th and 15th will allow us to put up a good fight in tomorrow's sprint. Both drivers did a very good job in Q1, Antonio's final lap was especially good as he climbed to P7. This allowed us to clear the first hurdle, which was a good result given how incredibly close the field was. We will be aiming to make up some more places ahead of Sunday, and we are confident we can give a good account of ourselves tomorrow."

Kimi Raikkonen: "P14 is probably all we could get from the session today, so we will take it. In the car, the conditions didn't feel too inconsistent, so we were able to just focus on the driving. We start the sprint with the aim to make up a few places ahead of the race, so hopefully we can make our job easier ahead of Sunday."

Antonio Giovinazzi: "Our pace wasn't bad. My Q1 lap was really good, unfortunately we had to use three sets of tyres in the session and only had one new set for Q2. I had a lock up in turn one with my remaining new set and the lap was gone. We still have the sprint qualifying tomorrow, so we will try to gain more places and set us up in a good place for Sunday. As always with sprint qualifying, we don't have a lot of data, just a few laps from this morning, so it's hard to know what to expect. The weather is predicted to be better tomorrow and on Sunday, let's see what we can do and what we can get out of the race."