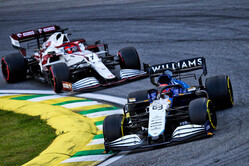 After both drivers lost a position to the fast-starting Lewis Hamilton on the opening lap, they both gained a place back due to a spin for Kimi Raikkonen later in the session and subsequently came home in the positions they started.

Dave Robson, Head of Vehicle Performance: It was a relatively straightforward day for us. We gained a place to Raikkonen through the Sprint Qualifying session and we did no damage to the cars. There was a good mix of tyre choices, with those starting on the Qualifying compound struggling by the end. We opted to start both cars on the Option, which was still going strong at the end of the race. Unfortunately, we needed another lap or two to catch Tsunoda and Giovinazzi. The race tomorrow will be held in quite different conditions to today's session and the high track temperature will require more tyre management. We still anticipate a range of viable strategies tomorrow, which could make the race interesting.

Nicholas Latifi: We were lacking pace today in Sprint Qualifying so I couldn't really challenge anyone ahead. If there had been one more lap, I could've possibly caught Yuki Tsunoda ahead but, having said that, we were struggling slightly with our tyres too. It will be a long race tomorrow but a lot can happen here in Brazil, so we'll have to see if any opportunities present themselves and be ready to take advantage of them.

George Russell: I had a bit of a battle out there but unfortunately it was a pretty processional Sprint Qualifying session for us today. In these short stints, it's hard to gain a big tyre difference that gives you a chance to overtake. I think there will be some different strategies tomorrow which will offer opportunities, but we're struggling for pace overall this weekend so we will have to see.