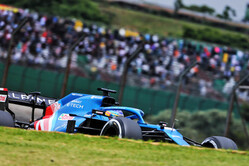 Overnight there has been much excitement here, first with Mercedes and Lewis Hamilton being summoned by the stewards over an alleged rear wing infringement, and then Max Verstappen also being summoned over a breach of the sporting regulations in that he broke parc ferme rules.

Indeed, video footage from the moments after Sprint qualifying had ended show the Red Bull driver inspecting and appearing to touch the rear wing on Hamilton's car - the very rear wing that is under investigation.

Long-time readers of this site will not be surprised to hear that we haven't ruled out the involvement of the legendary Turk Thrust and FOSU, the Formula One Script Unit, first exposed by the late, great Mike Lawrence. Indeed, he would be proud.

That aside, the next hour will allow the team the opportunity to perfect their set-ups for this afternoon's Sprint and tomorrow's race, and with Hamilton and Verstappen both facing the possibility of being demoted to the back of the grid the next hour could prove crucial.

Behind the usual suspects yesterday we had lone wolf Gasly, ahead of the perfect symmetry of the Ferraris, McLaren and Alpines, which again hints at the involvement of FOSU.

With drivers obliged to use the softs in qualifying but given free rein this afternoon and tomorrow, we can expect a fair amount of action especially in terms of the mediums and hards.

Fifteen minutes ahead of the session there is still no news from the stewards... meanwhile, there's a practice session to be run.

Understandably, there is much media activity outside the Mercedes garage.

The lights go green and Stroll is first to head out, the Canadian on mediums. He is followed by Mazepin, Raikkonen and Giovinazzi.

Raikkonen sets initial pace, the Finn crossing the line at 14.604.

Five minutes in, Perez is the first of the big guns to head out, the Mexican sporting a used set of softs.

With the stewards still impounding Hamilton's rear wing, Mercedes has been given permission to use a replacement.

Ferrari head out, Leclerc on softs and Sainz on mediums, while both McLarens are on the red-banded rubber.

Mazepin is the only driver running hards.

At which point, Verstappen heads down the pitlane, like his teammate he is on used softs.

Perez improves to 13.219, as Gasly goes third, ahead of Russell, Leclerc and Raikkonen.

Verstappen aborts his first flying lap, while the camera cuts to earnest discussions in the Mercedes garage.

Next time around, Verstappen goes quickest in S1, maintaining the pace into the second sector. At the line it's 12.102 as Ocon goes third (13.353).

17 minutes in and the Mercedes pair are the only drivers yet to appear.

"It feels like you added aero balance," reports Sainz, as Ocon improves to second with a 13.086.

As Hamilton finally heads out the crowd cheers, the Briton enjoying a lot of support here.

Leclerc is among the first to have a time deleted for exceeding the limits at Turn 4.

Bottas heads out but subsequently pits before heading out again. Both Mercedes drivers on the soft tyre.

Vettel and Stroll both switch to the hard rubber.

"Feedback from other teams suggests rears are overheating," Bottas is told, as Hamilton aborts his first flyer.

Hamilton's first flyer sees the world champion go 13th with a 14.865, as Vettel is advised how to avoid sliding at the exit of Turn 11.

Hamilton advised of Bottas' pace and also the fact that the Finn requires less (tyre) management.

Verstappen switches to the mediums as does Perez. While the Dutchman fails to improve, a 12.903 sees Perez go second, albeit 0.8s off the pace.

A 13.355 sees Raikkonen (softs) go fourth, ahead of Gasly, Tsunoda, Russell and Latifi.

From out of nowhere, Alonso, on softs, produces an 11.238 to go quickest, while teammate Ocon goes third (12.407), ahead of Perez. That said, the Frenchman is unhappy with the sound from his car despite the assurances of his team.

Leclerc goes sixth with a 13.257 to split the Alfa Romeo pair. Moments later he is leapfrogged by his Ferrari teammate.

With 10 minutes remaining, Hamilton heads out again on used softs. He is followed by his teammate who has also opted for used softs.

"I don't know if I have a problem, but it's undriveable" reports Gasly as he heads into the pitlane.

In the warmer conditions were seeing more mistakes, especially in Turn 4.

It means the boys are in unfamiliar positions on the leaderboard."

On board with Gasly shows the AlphaTauri really is a bit of a handful.

Sadly that is not the order for the Sprint or even the race, for it is fair to say that the order is pretty mixed up.

That said, and in all honesty, for much of that session attention was not entirely focussed on what was happening on track but rather what might be happening in the stewards office, as they continue to look into the investigations into the two title contenders.