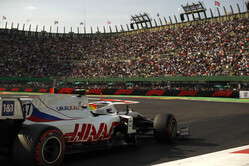 Round 18 of the 2021 FIA Formula 1 World Championship began with practice on Friday at Autódromo Hermanos Rodríguez as teams prepared for Sunday's Mexico City Grand Prix.

The team opted to split the tire strategy to kick things off in FP1 - Schumacher heading out first for a wake-up run on the Pirelli P Zero Yellow medium tires with Mazepin utilizing the White hard compound. Both VF-21s transferred onto the Red soft rubber for baseline runs - setting their best laps along the way. Schumacher clocked a 1:22.144 to Mazepin's 1:22.819 - placing P19 and P20 respectively. High-fuel runs closed out the opening session.

FP2 saw both drivers add to their morning lap tallies with another solid session in the afternoon. Schumacher classified P16 having set a fastest lap of 1:19.620 during his qualifying sim on soft rubber. The German started the session sampling the hard compound for the first time. Mazepin placed P19 with a best lap a 1:21.581 - also on the soft tire. The Russian commenced his run plan starting with the medium rubber. Schumacher and Mazepin wrapped up Friday's running with long-distance stints through to the checkered flag.

Nikita Mazepin: "It's been tricky out there. It felt a little bit like a street circuit during FP1, with so much dust and my helmet was covered in it - I think I went through over 10 tear-offs which I've never done this season before. Apart from that, I'm getting to know Mexico - it's a very low downforce circuit and we're using our maximum downforce, which isn't enough here. We knew what we were going into - I've watched a lot of onboards and listened to what the engineers have been told by other drivers. It's what we expected but we still need to improve the balance and we'll go from there tomorrow."

Mick Schumacher: "Overall, it was positive. I think we solved the issues in FP2 that we had in FP1 and we can be happy with the day. We've learned a lot - the track is fun to drive - and I'm really looking forward to tomorrow. It was better than I expected in terms of behavior of the car and that's a very positive trait for today. There's still more to come, hopefully, it's all about trying to hit the right lap and be in the right spot at the right time."

Guenther Steiner: "Maybe not two completely smooth sessions for our drivers today, but in terms of bagging mileage at a circuit that's new to them both, it's at least been a productive to start the weekend. There's no substitute for logging those laps and getting over 100 in on Friday - with two rookies - it's a good thing. There weren't really any surprises today in terms of the pace of the VF-21 but I'd say Mick's FP2 lap time is a positive takeaway. Both drivers will build on what they've learned today and we'll apply that tomorrow in qualifying having looked over all the data tonight. It's always tough here, Mexico's never been a kind track for us, but we'll push in qualifying and see what Saturday brings."