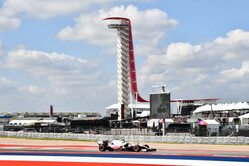 Schumacher and Mazepin exited qualifying after the opening session - Q1, where only the top 15 progress. Schumacher ran three sets of new Pirelli P Zero Red soft tires with his second set of rubber delivering his fastest lap of 1:36.499. Mazepin opted to run two sets of the soft compound with his best lap of 1:36.796 delivered on his final timed outing.

Max Verstappen claimed pole position - the Red Bull Racing driver edging his title rival, Lewis Hamilton of Mercedes, by .209 of a second with a hot lap of 1:32.910.

Nikita Mazepin: "I'm struggling with high-speed balance, so I needed to see what the car does when I go a little faster and the way you test that is you do carry it faster, and it's not difficult for me to bring it back when it mattered. I explored the limits as you do when you're 10th in the constructors' championship - you want to try and extract more than physics can bring you and make a miracle."

Mick Schumacher: "Enjoyment was high, luck was low! We were a bit unlucky with the last set of tires as we didn't really get to go before they cooled, so we started the lap with very cold tires and unfortunately that meant we had very low grip in the first sector - and that's where we needed it. It wasn't meant to be today, but we'll try our best tomorrow."

Guenther Steiner: "The guys gave it their best today, as they always do. Nikita got a bit of extra running in on his side to begin with on his first set. He then duly delivered a solid lap when he put his second set on which was good to see. Mick was unfortunate not to get a faster lap in on his final run but that's the way it goes sometimes. As I said before, we're just happy to be here in front of these fans and we look ahead to Sunday's race now. We'll be moving up the grid a bit with the penalties for the other cars, but we know keeping them behind us will be a struggle. Everyone will give it their all - there's no change in our approach. Let's see what happens."