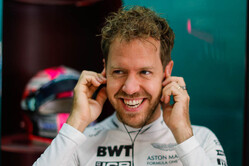 Lance: “I love racing in Austin, and it’s great to be able to spend some time at home in Canada to recharge ahead of the Grand Prix. It’s a critical race for the team, and we’ll be giving it everything in pursuit of more points. It’s a challenging track with the first sector having a flow element in contrast with the final sector which demands precision, making it quite easy to run wide. We’ll be pushing the limit to find the limit in the build-up to Sunday."

Sebastian: "We're looking to bounce back in Austin. As we've seen in recent races, we have the pace to fight in the midfield, but it's such a close fight, and it's very easy to miss out on points. This circuit really tests the set-up of the car, so the key is to maximise practice and build on it going into qualifying and the race."

From pole position, the run to Turn One stands at only 325m, but a wide corner entry, uphill approach and blind apex create the perfect conditions for wheel-to-wheel action. With a second DRS zone on the start/finish straight, Turn One will be an overtaking hotspot during the race.

With 61 overtakes after lap one, the 2019 United States Grand Prix featured the second-highest number of overtakes in a dry race that season, behind Bahrain. More than 70% of overtakes in Austin are performed using DRS, with Turn 12 the most popular passing spot, followed by Turn One.