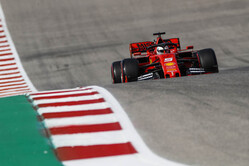 An ongoing issue at the Circuit of the Americas, Michael Masi reveals that following the recent MotoGP event, work is to be carried out on the track's notorious bumps.

While bumps can become part of a circuit's character, such as that on the run down to Mirabeau from Casino in Monaco, they can be terminally damaging to cars.

In 2019, the last time F1 visited, Sebastian Vettel suffered a suspension on one of the many such bumps at the Circuit of the Americas,

Though bumps had always been an issue, things were made worse by the heavy rains and flooding of 2015, consequently over the course of the 2019 weekend surface grinders were used at some sections of the track to ease the problem. However, as Vettel's failure showed this did little good.

Though some parts of the track were resurfaced over the winter of 2019/2020, the problem remains. Indeed, the bumps caused problems during the recent MotoGP event, to such an extent that, following complaints from a number of riders who declared the track "unsafe", the series has threatened not to return unless significant improvements are made.

"We're actually closing the track for most of December and half of January to fix the problems," circuit boss, Bobby Epstein told Motorsport.com ahead of the 2019/2020 work. "We did some of the repairs last year before MotoGP, so I wouldn't say we'd have to do the whole thing.

"Certainly it will involve the entire back straight, the pit out and part of Turn 1," he added, "there's a part of a hump before Turn 9, Turns 18-19. So it's pretty extensive. I know what the bill is!"

Despite that bill, it is understood the work was not carried out by, or even under the supervision of, a specialist, which is what MotoGP is now demanding.

Ahead of next week's Grand Prix, F1 race director, Michael Masi has been in touch with officials at COTA and MotoGP, as the Austin circuit seeks to address the issue once and for all.

"I was on the phone to my FIM colleagues all weekend whilst they were in Austin to get a true understanding of the entire situation," said Masi, according to F1i. "What we have actually done is, since the 2019 F1 event a large part of the circuit was resurfaced to counter some of the issues that we saw in 2019.

"The areas that were raised by the bikes is different areas to those that were resurfaced," he added.

"Tony Cotman, who is one of the FIA circuit inspectors who was previously Champ Car/IndyCar race director, who is in the US, has been out to Austin already during the week," he revealed. "He's done a report and the circuit are doing some changes for us to address some of the concerns.

"They'll grind some bumps and so forth, but we've got some time to do it so they'll do what they can in the time frame."