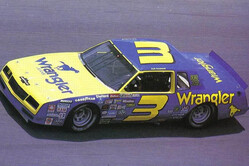 Following a bet with team boss, Zak Brown, Daniel Ricciardo will get to drive Dale Earnhardt's Chevrolet Monte Carlo at the Circuit of the Americas next week.

Known to be a big fan of the American racer, on signing for McLaren, having given Ricciardo a model of the car, Brown revealed that he owned the original car and should the Australian score a podium finish for the Woking outfit he would allow him to drive it.

Of course, Ricciardo went one better, by winning the Italian Grand Prix.

True to his word, Brown is giving the Australian an outing in the iconic car over the course of the United States Grand Prix weekend at COTA.

"That's another, I mean, a pretty sweet experience that I'll hopefully get to do soon," Ricciardo told The Grille podcast ahead of last weekend's Turkish Grand Prix.

"Growing up I was just a lover of motorsports, two wheels, four wheels, all of it," he continued. "I grew certainly a fond fan of Dale Earnhardt and to kind of get behind the wheel of a car he raced, that'll be pretty surreal.

"I think it will happen probably within the next couple of months," he added. "It might even happen in the States... we'll see.

"I know the car's based in Europe at the moment, but maybe to go with the American theme, who knows, they might send it over to Austin and do a few laps in Texas."

And that is exactly what will happen, with Brown and McLaren having confirmed that "Dale Earnhardt Snr's iconic 1984 Wrangler Chevrolet Monte Carlo will be driven by Daniel Ricciardo at COTA next week."

"Like I'm not excited as it is for Austin! Wow," tweeted Ricciardo in response to the official confirmation.