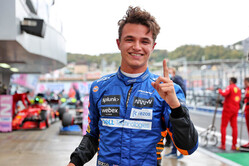 Keen to consign his Sochi heartbreak to history, Lando Norris says "I just want to get back in the car and try again".

Overruling his team on tyre choice in the final stages of the Russian Grand Prix, the McLaren star ultimately came to regret his decision. Seemingly heading for his first F1 win the youngster insisted that despite worsening conditions he could make it to the end on slicks.

Lewis Hamilton, who was equally confident he could stay the distance without pitting finally succumbed and subsequently went on to claim victory, while Norris ultimately crossed the line a distant seventh.

Arriving in Turkey, the youngster understandably wants to put Sochi behind him.

"We've come off the back of two very good weekends, both from Italy and of course Russia, especially with how Russia ended I just want to get back in the car and try again," he said, according to the official F1 website.

"It's not going to be a guarantee or anything that we'll be able to do as well, we might not score another pole position or be able to get on the podium necessarily but we can still have a good weekend, get some points on the board and that's the aim for this weekend."

Despite how it ended, overall, Sochi and the race that preceded it, were good for McLaren.

"I don't know what kind of places we'll be really strong at, what places we won't be," said Norris. "I would say I don't think we were expected to be quite as good in Russia as what we were as well so for us it's just waiting and seeing.

"The anticipation is a nice thing in a way, but we're not in a situation where we can say: here we're going to be really good, here we're going to be very good. We have a rough idea but just going out and driving, things can always change and the confidence of a driver can always change massively, we'll see this weekend if we have another good one."

Inevitably however, he was asked to reflect on Sochi.

"There was actually a huge amount of positives from the weekend," he told reporters. "I scored my first pole in Formula 1, I still managed to lead and manage the whole race very well from start to almost finish.

"Just the pace in general and how I think I drove for the majority of the whole weekend, even from Friday practice to Sunday, and even in Sunday when it wasn't going well, my driving was still good," he added.

"There was many good things from both the team side and also mine, but of course they are clouded over by the results in the end of the day.

"I think the inevitable conclusion of everyone can see now is we should have boxed," he admitted, "we should have seen that there was more rain coming.

"But what people don't see is how this is built up, and the things behind the scenes which come from my side and the team's, which we'll aim to do better next time.

"I learned a lot," he said of the experience. "It wasn't just that decision at the end of the day which could be improved, there's many things from my side. I guess just dealing with the situation I was in - leading a race having Lewis behind me - that was probably not a situation I've been in where there's been almost so much pressure on me as the driver, especially when the conditions started to get worse.

"The level of concentration you need is insane, and it's something that's very difficult to describe to a person who hasn't been in a Formula 1 car in these conditions with Lewis just behind you.

"So just dealing with that pressure, being able to still talk to my team, at their highest performance, to be able to communicate with my team in just the best way while dealing with this pressure.

"A lot of the time I'm the kind of driver who doesn't like too many communications, and I don't talk too much. I like to just kind of be quiet and drive," he admitted. "There's a level of when you have to add to that.

"Just being in that situation is I think, a good learning point, but that's an experience thing, it's not something you can necessarily just prepare for on Sunday morning."