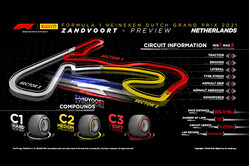 The Zandvoort circuit looks somewhat different to the track that last hosted Formula 1 in 1985. In particular, turns 3 and 14 (named after former circuit director John Hugenholtz and Dutch driver Arie Luyendyk respectively) are now banked at around 19 degrees. That’s roughly double the banking at Indianapolis, which is about nine degrees – meaning that the cars will be able to take these corners much faster than they did in the past, with more energy going through the tyres.

Turn 14 is taken flat-out, generating forces in excess of 4g, while there are two corners with heavy braking of around 5g: the entries into Turn 1 and Turn 11. Turn 7 is another corner that generates lateral forces of about 5g, taken at over 260kph. This leads immediately into Turns 8 and 9, completing a sequence of three consecutive corners with high g forces.

As expected from a circuit that was originally inaugurated back in 1948, Zandvoort has a distinctly old-school feel to it, with fast and narrow turns, along with a number of elevation changes.

One of the most famous corners is the Tarzan hairpin: the first corner of the lap, which is now closer to the start-finish line than it was previously. The Hans Ernst bend towards the end of the lap also has a wider exit than it did before, enabling drivers to get on the power sooner.

Zandvoort is located in an area of sand dunes near the beach, with the wind sometimes blowing sand onto the track and affecting grip; an issue normally associated with places like Bahrain.

The return of the Dutch Grand Prix was initially scheduled for 2020 but postponed to this year as a result of the Covid-19 pandemic. With some high-energy corners and no relevant previous data to fall back on, the hardest tyres are the most suitable choice.

Mario Isola: "The Dutch Grand Prix is obviously a new challenge but thanks to the data provided by Formula 1 and the teams, we have been able to come up with a tyre nomination and prescriptions that are closely aligned to what we can expect from this exciting new venue. Being a new track, the free practice sessions will also be essential when it comes to gathering real data and formulating the tyre strategy for the race. What's for sure is that the circuit layout is going to place heavy demands on the tyres, as can be seen from the computer simulations that we have already carried out. We've already raced at Zandvoort in the GT World Challenge this year, and this too has provided us with some useful information."