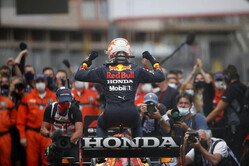 How was your summer break? Does it feel good to be back and heading straight into a triple header?
Max Verstappen: My summer break was good, it was nice to have a few weeks off to rest a bit and of course it was cool to spend some time on the jet skis, it's a lot of fun being on the water! It feels good to be back, a triple header is a lot of races in a row but it's the same for everyone and there are a lot of fun tracks coming up to look forward to.

This weekend we celebrate our 50th race with Honda - which race stands out the most to you?
MV: These 50 races with Honda will always be special and well remembered when we look back. I think of course the first win with Honda will always be the most emotional memory during our time together and hopefully we can end this season on a high with them before they leave the sport. I have enjoyed working with Honda from the start. They have always been straight talking and delivered what we have expected. They spend a lot of time discussing everything with the team and us as drivers which has been very important.

The Belgian Grand Prix is one of your 'home' races and Spa is one of your favourite tracks so how much are you looking forward to this weekend?
MV: I am of course excited to go back to Spa, it's my favourite track and it's really cool to drive with so many high speed corners and elevation changes. I'm also looking forward to seeing all the fans who will be coming to support us and it will be cool to see so much orange in the grandstands again as they couldn't be there last year. I also think it is a good place to re-set our championship fight and I'm well prepared and feeling good ahead of the weekend.

How was your summer break and did you manage to switch off from Formula One?
Sergio Perez: It was a good time to recharge, get some fresh air, and having two weeks in the same place is always nice! I managed to switch off completely from F1 which is important. both mentally and physically. Now I'm back, fully refreshed and it's going to be a very intense second part of the season. It's crazy to think in four months the season will be over.

You retired from the Hungarian GP so you haven't raced in almost a month. How hungry are you to get back out on track?
SP: I'm very hungry! Not just for Spa but for the second half of the season. I'm feeling more and more comfortable with the car, we're taking the right steps forward and I think we're going to have a strong end to the season.

How much fun is the Spa circuit to drive with this generation of Formula One car?
SP: With these cars it's a lot of fun to drive and a very fast track. The weather can be temperamental around Spa and because the circuit is so long it can be dry in some parts but wet in others which makes the conditions tricky to judge.

This weekend we celebrate our 50th race with Honda. What have they been like to work with?
SP: Honda are so enthusiastic, you can see their passion for the sport and it's nice to have people around you with that kind of energy. I've enjoyed working with them and it's been a great experience so far so I hope we can repay them by winning this year's championship before they leave sport.

Christian Horner: Our relationship with Honda has grown from strength to strength since we started working together at the beginning of the 2019 Formula One season. We are enormously proud of our joint success to date, delivering 11 wins and 32 podiums from 49 race starts. Spa will mark our 50th race together and this is a great moment to reflect on what we have achieved so far, build on that success and also thank everyone at Honda for their extraordinary effort and commitment, which has enabled us to be in the position to fight for a championship this year.

Toyoharu Tanabe, Honda Racing Technical Director: In a short space of time, we have achieved some great results in this hybrid era, such as our first win in Austria in 2019 and first pole in Hungary that same year, as well as our first double podium with Red Bull in Bahrain 2020 and, most recently, the fact we have taken five consecutive wins so far this year.

Honda had been back in Formula One for four years before joining up with Red Bull and we had not even scored a podium finish, so we have come a long way to be now fighting for the championship together with Red Bull. This is down to a lot of hard work and excellent communication from everyone at Honda and Red Bull. On the eve of our 50th race, I want to thank Red Bull Racing for their open and fair approach and the trust they showed in us, sharing the same goal. In addition, we must not forget the contribution from the drivers in that time.

Another key factor was our excellent cooperation with Scuderia Toro Rosso back in 2018, which laid the groundwork for partnering both teams as from the following year and we are proud of what we have achieved so far. There are only around a dozen races still remaining for Honda's F1 project and we will all be pushing as hard as possible to finish this adventure on a high.

In our 49 Grands Prix with Honda, we have achieved 11 victories, 32 podiums and 8 pole positions.

Back in 2015 aged just 17, Max drove Eau Rouge backwards in the Red Bull RB8 in a promotional stunt.

Max will participate in two home races on consecutive weekends. F1 returns to the Netherlands next Sunday whilst this weekend Max races in his actual country of birth, having been born in Hasselt, 100 km to the northwest of Spa.

Despite Spa being his favourite track, Max has never led a lap or finished higher than third at this circuit meanwhile Checo has three top-five finishes and has qualified in the top four on three occasions.

Daniel is our most recent winner at Spa, claiming our 50th F1 victory at the 2014 Belgian Grand Prix. Honda seek their first Spa victory since 1991.