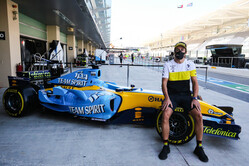 As Christian Horner calls for noisy, high-revving engines for 2025, Toto Wolff argues that the sound of F1 has little relevance to new fans and that F1's stakeholders, partners and sponsors want an end to the internal combustion engine.

While he will no doubt echo Ross Brawn's mantra that it's "for the fans", Christian Horner's call for high-revving, noisy engine in F1 is clearly aimed at Red Bull's own ambitions.

At the recent Austrian Grand Prix, the manufacturers, including potentials Audi and Porsche, met with F1 and the FIA to discuss the new engine formula for 2025 and beyond.

While little has been revealed about the meeting, other than the fact that it was (groan) positive, Toto Wolff has admitted that the electric component will increase "massively".

While he agreed that the internal combustion engine will be retained he believes that the use of sustainable fuels will help appease the critics, certainly in the short term.

Speaking at the official press conference at Silverstone, Red Bull boss, Christian Horner agreed with the move to sustainable fuels, however other than that, much like their on-track rivalry, the Briton is clearly at odds with his Mercedes counterpart, for while one wants noisy, high-revving engines, the other doesn't.

"I think the combustion engine does have a future," said Horner, "so why not introduce high-revving engines that sound fantastic, and that are doing it in an environmentally friendly manner. I think that the biofuel and sustainable fuels enable you to do that."

"Electrification, I know, politically it's being pushed," he added, "but actually is it the right route for 25 to 30 years' time? I think F1 could play a key role with the fuels and with the fuel partners that we have on sustainability and zero emissions, with a high performance, high revving emotive engine.

"Wouldn't it be fantastic if we went that route? I'm sure every Grand Prix would be packed."

To emphasis his point, Horner - and without a hint of irony - recalled last year's Abu Dhabi Grand Prix, when Fernando Alonso rans a number of demonstration laps in his 2005 championship winning V10 Renault.

"Every fan out there, when you hear Fernando running his V10 Renault, around Abu Dhabi, the emotion and noise for me is still such a key factor that is missing from the sport.

"We need to turn the volume up," he continued, "but do it in a responsible and cost-effective manner, and environmentally friendly, but it needs to be entertainment - that's why people turn the TVs on, that's why they watch this sport."

"I would disagree with Christian because it's what we think, but we are not the most relevant generation anymore," said the Austrian. "When you ask an 18-year-old or 22-year-old, what relevance noise has, most of these guys consume it via different screens where noise has little or no relevance.

"I personally like it too," he added, "and I'd like to have a 12-cylinder that screams down the road. But, it is a matter of fact, we are a sport and we are a business. I think we would lose complete relevance with our partners, sponsors, and major stakeholders, if we weren't looking at the environment and the impact that we make.

"I think it would be totally misaligned of where the world is moving, and probably turn every single business partner away from F1 if we stick with internal combustion engines that scream, even though we may like them."