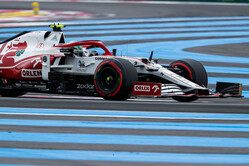 Alfa Romeo Racing ORLEN will have a good chance of points in tomorrow's French Grand Prix after a fairly positive qualifying session, with Antonio Giovinazzi showing the pace of the team's C41 car by qualifying in 13th position. Team-mate Kimi Raikkonen was on course for a good result, but an unfortunately timed red flag meant he had to abort his best lap and will have to line up 17th on the starting grid.

A cooler, cloudier day meant temperatures weren't soaring as on Friday, but the Circuit Paul Ricard remained a tricky place to do business. Two red flags in Q1 made for a stop-start session in which setting a lap was a challenge. Unfortunately, that claimed Kimi, who had to give up his fastest attempt as the session was brought to an early end: the result will see him line up on the ninth row of the grid tomorrow.

The remaining Alfa Romeo Racing ORLEN of Antonio had managed to set a time good enough for Q2 and, in the second segment of qualifying, the Italian delivered a good attempt to set the 13th time, just 0.2s shy of a place in the top ten.

Starting in that position, Antonio will be able to choose his own starting tyres for the race - something that proved an advantage the last time we raced here, in 2019. Such a bonus could be crucial as we aim to nail the right strategy for tomorrow's race - unless it rains, of course...

Frederic Vasseur, Team Principal: "The team did a good job today and we are confident we would have been on course to have a good result with both cars, hadn't it been for the second red flag. As things went, we have to be really happy with the position Antonio achieved: he will be able to start on the best possible tyres and we'll have all strategy options open to us. Kimi's race will be a bit more difficult, starting from the back, but with a good start and a good strategy we can hope to make up some places. Our race pace looked good in practice so we're still in with a chance."

Kimi Raikkonen: "Recently, the red flags seem to destroy my laps all the time. I was on a good one, the time was going to be ok, but when the red flag came out it was game over. In the end, that's what it is and there's nothing I can do about it. P17 on the grid is not ideal, but tomorrow is another day: our race pace was ok yesterday so we will try to get a result out of a disappointing Saturday."

Antonio Giovinazzi: "We can be happy about today's result: our target was P11, to be close to the top ten but not quite in it, as we knew the soft tyres would not be a good compound for the race. We nearly hit this target and we were very close to the cars ahead of us: tomorrow there's everything to play for. Choosing our starting tyre will allow us to maximise our strategy: if we have a good start and a clean first lap, we can make up some places and make our way into the points. Our race pace wasn't bad so we can be confident."