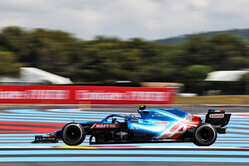 Alpine F1 Team enjoyed an encouraging day's practice in preparation for its home Grand Prix as Formula 1 returned to Circuit Paul Ricard after a one-year absence.

Fernando Alonso and Esteban Ocon were inside the top six across both Free Practice 1 and Free Practice 2 with Fernando finishing the day in fourth place, just 0.4secs adrift off the top spot. Home hero Esteban - buoyed by the return of fans in the grandstands - finished fifth in the morning session and sixth in the afternoon.

Both drivers sampled test items on the A521 in the early running before focusing on identifying an optimal set-up to deal with Circuit Paul Ricard's mix of medium and high-speed corners. Fernando solely ran Softs (C4) in FP1 - starting on low fuel and ending on high fuel - with Esteban beginning on Hards (C2) before switching to Softs in the latter stages.

In FP2, Esteban ran Mediums (C3) with Fernando testing Hards for the first time of the day. Both drivers then switched to Softs for the middle part of the session. Fernando set the fastest time in the second sector on his way to fourth with Esteban narrowly behind in sixth.

To round off Friday practice, Fernando ran Hards on high fuel with Esteban assessing the Mediums.

Esteban Ocon: "Today's practice has been solid. We're back into the top ten for the moment, but we know it's still early days. Both cars have good pace - that's promising - and the aim is to keep working hard and consolidate this pace. The car feels good and the team has been working hard on that. There are, of course, areas to improve, and there's more performance to find. It's fantastic to be back racing in France, at home, and even better to see fans in the grandstands. Hopefully there will be even more fans tomorrow and Sunday and I look forward to seeing them."

Fernando Alonso: "We faced quite tricky conditions today with some strong winds and high track temperatures, but I think we can be quite pleased with what we managed to achieve from Friday practice. We tested a few items in FP1 and then we followed our programme for the afternoon in FP2 with some decent mileage clocked. We'll analyse all of our data now and this evening, but so far I think we look quite competitive here so let's see how we go tomorrow."

Davide Brivio, Racing Director: "It's been a busy but well executed practice programme by the team today. Both drivers did a great job in both sessions and, looking at the timesheets, we're in and amongst the good positions. This circuit is different to the last two tracks we've visited, as it's a more conventional layout for Formula 1, which perhaps suits our car a little more. It's a promising start and we will remain focused with the job we have to do this weekend. That begins with Free Practice 3 tomorrow, where we will try to prepare ourselves for qualifying and ensure we follow up on today's performance."