F2 drivers Piastri and Zhou in action for Alpine

Held over Tuesday and Wednesday, the test was a vital part of Alpine's continued commitment to its Academy, as it readies its junior drivers for a possible Formula 1 race seat in the future.

In the driving seat on Tuesday was Oscar Piastri, who switched his 620 hp F2 car for the more powerful R.S.18 fielded in 2018. The Australian arrived at Silverstone on a high off the back of a double-podium finish around the streets of Monaco last weekend.

The reigning FIA Formula 3 champion, completed 86 laps in damp conditions, in what was his second-ever outing inside the cockpit of a Formula 1 car.

Meanwhile Zhou - the current championship leader in Formula 2 - took the reins from his Academy team-mate on Wednesday. In much drier weather conditions, the Chinese driver completed 106 laps in his fifth time testing the R.S.18.

Following the test, both drivers now head to Azerbaijan for round three of the Formula 2 championship alongside fellow Academy team-mate Christian Lundgaard.

Entering Baku, Zhou leads the way in the standings by sixteen points to Oscar in second place, with Christian in twelfth after two rounds. 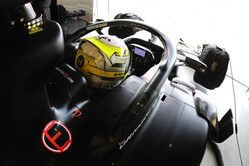 "It's been a good two days of testing," said Mia Sharizman, Alpine Academy Director. "It's the first time we've tested at Silverstone with the R.S.18 car and it's obviously the first time the Academy drivers have done an F1 test this year.

"Our programme ran smoothly, despite some of the bad weather for Oscar. He did approximately 500km and completed a full F1 race distance, which is good considering it's his second time in an F1 car. Our aim for him was to get up to speed with the car and continue his development.

"For Zhou, it's good to see his continued maturity and he has come on leaps and bounds of late, in what is his third year in the test programme. It reflects in his R.S.18 programme today, where he completed 106 laps, the most mileage he has done with an F1 car in a single day.

"Both drivers will take some great learnings from the two days and we'll continue to look at future test opportunities for all our Academy drivers."

"It was a great experience driving a Formula 1 car again," said Piastri. "There are not many better combinations than driving an F1 car fast around Silverstone. It was a little bit wet in the morning, but we completed a lot of laps in the afternoon with a few qualifying and race simulations thrown in there too. I've learnt a lot from the day and it will stick in my mind for a long time. Hopefully, it's the first of many experiences here driving an F1 car at Silverstone."

"Yesterday was a really good day," added Zhou. "It was so nice coming from Monaco to Silverstone and feeling the amazing downforce in a Formula 1 car. I adjusted to the car straight away even though it was my first time in an F1 car this year. We had some light rain at Silverstone, but it didn't impact our plan too much and I am happy with the progress we made as a team and for me personally."