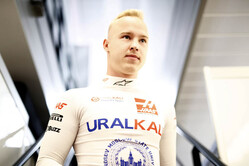 Haas driver, Nikita Mazepin has clarified the situation following talk of him having to observe mandatory military service in the Russian forces.

All males in Russia between the ages of 18 and 27 are obliged by law to serve one year in the country's armed forces - the length of service reduced from 2 years in 2007.

While there are exceptions, avoiding the draft is a felony under the Russian criminal code and is punishable by up to 2 years of imprisonment.

Last week reports began circulating that Mazepin would need to take time out from his F1 activities with Haas in order to fulfil his military duties, however the Russian has clarified the situation.

I'm aware there has been a bit of discussion there," he said, according to Motorsportweek. "From my side, the situation is very clear; I study in university, and the way it works in Russia, there is a mandatory military service, and there are two ways of serving, if you're fit enough.

"Option one is finishing university and then going for a year. And option two is if you qualify being fit enough in terms of your fitness results and in terms of your studying results, you can go on to something called like the elite army, which is served in a completely different way.

"Five days ago, I passed my final exam in university for finishing my first four years, and I'm moving on to get a second masters degree later, in the coming two years."

Taking the academic route is probably the best solution for all parties, as one dreads to think of him getting his hands on a T14 Armata or T90 Vladimir.