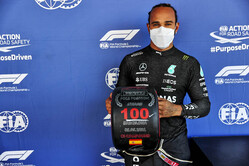 This morning, as expected, Max Verstappen served notice that he and Red Bull are very much up for the fight, and though it is still not clear whether yesterday was about sandbagging or simply another mistake from the Dutchman, he is clearly in the mix going into this afternoon's all-important session.

Teammate Sergio Perez however, could only manage tenth, 0.771s off the pace and behind Kimi Raikkonen, as the Mexican continues to struggle with a car which was clearly built for the team's lead driver.

Similarly, while Lewis Hamilton was second, Valtteri Bottas could only manage fifth.

Splitting the Mercedes pair were the two Ferraris, as Charles Leclerc and Carlos Sainz continue to build on the Maranello outfit's obvious step forward this season.

With the Top 13 drivers covered by just 0.865 it is clear that this afternoon is going to be tight, and while the usual suspects are likely to fall at the first hurdle, traffic, not to mention the unforgiving nature of the track could throw up a few surprises.

Indeed, Kimi Raikkonen was ninth earlier, and while the McLarens improved on yesterday's showing, like Alpine and AlphaTauri they show little consistency here.

Indeed, other than Mercedes and Ferrari, and to an extent Red Bull, most of the teams have yet to settle which no doubt accounts for the erratic form we are witnessing from session to session this weekend.

Other than traffic, certainly in Q1, a big factor this afternoon will be tyres, not only whether the mediums are a better option than the softs, but also whether a driver can manage them in S1 in order that they still have plenty of grip in the challenging final sector.

As was the case last week in Portugal, there is a delay to the start of the session, this time due to a barrier being need of a repair - last week it was a loose drain cover.

Meanwhile, it has been revealed that Raikkonen's puncture this morning was caused by a camera located in the kerb which had been worked loose from its housing.

The lights finally go green and the Williams and Haas pairs are first out.

The Bulls and Mercedes head out, the Black Arrows both on mediums.

Hamilton goes quickest in S1, but Verstappen goes quicker, only for Bottas to top the Dutchman.

All three continue to trade fastest sectors as Perez posts an 18.609.

Norris goes quickest in S1 as Tsunoda goes seventh overall. The McLaren driver posts a PB in S2, finally crossing the line at a disappointing 18.806 after encountering traffic in the final sector.

Gasly goes third with an 18.190, while Ocon goes seventh and Alonso tenth.

Such is the traffic the drivers are almost tripping over one another at the final chicane.

Latifi reports that his right-side mirror is cracked. The replay showing that it broke as he ran over the kerbs.

Perez improves to fourth with an 18.203, the Mexican managing this on his second flying lap.

The silliness continues, Tsunoda overtakes Leclerc for track position, while in the pitlane a Williams is released into the path of several rivals.

A Turn 14 incident involving Norris will be investigated after the session.

Raikkonen goes quickest of all in S1, though moments later Norris goes quicker.

Stroll goes seventh, Giovinazzi 11th but the Italian is demoted by Alonso.

Russell goes 14th with an 18.445, which relegates Tsunoda to the drop zone.

Q2 gets underway and the Mercedes duo lead the way, both sporting the softs.

They are followed by Gasly, Perez and Stroll. Soon Verstappen, Vettel and Giovinazzi join them. The Italian is on the yellow-banded rubber.

What was that about sandbagging?

Norris is fourth, ahead of Stroll, Gasly, Perez, Vettel, Giovinazzi and Sainz.

Ocon goes seventh and Alonso sixth, only to be demoted when Leclerc goes 6th with a 17.919.

With just over 5:00 remaining, the drop zone comprises Ocon, Perez, Vettel, Giovinazzi and Russell, who has yet to post a time.

Taking advantage of an empty track Russell heads out, however his time of 19.154 is only good enough for 14th.

All are on track for the final assault, all bar Verstappen that is, the Dutchman understandably having settled for that awesome time.

All are on softs.

Vettel is the first to post a PB, as Perez, Ocon and Alonso also look set to improve.

Leclerc goes 5th only to be demoted when his teammate goes 4th.