Verstappen throws down the gauntlet in FP3 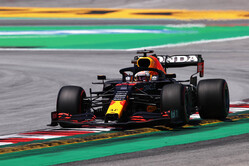 The big question heading into today's sole practice session is whether - as suspected - Red Bull was sandbagging yesterday, certainly in the second session.

Though Max Verstappen's qualifying sim was compromised by traffic following the red flag period brought about by Robert Kubica, and a mistake at Turn 10 on his one real flying lap, that didn't seem to account for the overall lack of pace.

With Tsunoda around 15 mph faster through the speed-trap this led to speculation that the Bulls are holding back.

Then, this morning, Verstappen tweeted: "Let's find out what we've got", and while there were no wink emojis... well, let's wait and see.

While Red Bull did whatever it is doing, Valtteri Bottas quickest in the opening session, and Lewis Hamilton in the afternoon.

Not too far behind was Leclerc ahead of the Alpine and AlphaTauri duos.

The fact that the McLaren pair were 12th and 15th has led to speculation that the Woking outfit could also be sandbagging.

At Aston Martin, Vettel now has access to the updates previously only available to his teammate and has upped his pace accordingly.

The lights go green but it is a couple of minutes before the first car heads out... which is Alonso almost five minutes later.

The Spaniard, on mediums, gets proceedings underway with a 21.020 as he complains of "low grip".

Eleven minutes in and the second car to appear is that of Perez, followed by Ricciardo.

Twenty minutes in and the only drivers yet to appear are the Mercedes pair and Verstappen.

Both Ferrari drivers improve, Leclerc consolidating the top spot with an 18.882 and Sainz going second with a 19.049.

The Mercedes pair head out on softs, while Verstappen is on mediums.

"It could be more interesting to try a bit more front wing," Ricciardo is told.

Raikkonen goes quickest in S1 but subsequently loses a heap of time in the second sector.

Bottas is told that Hamilton had a tow in S2, while Verstappen is told that he was up on the Mercedes in S1, but down in the other sectors.

A strong opening sector from Verstappen on his next flying lap, but he aborts following a snap of oversteer in Turn 9, possibly due to the wind.

Hamilton improves to 18.117, having gone quickest in the final two sectors.

Given advice by his engineer regarding braking for Turn 10, Tsunoda complains that he is always told of such things after the corner. "Calm down," he is firmly told, "it's for the next lap."

"Unbelievable this guy in the last sector," says Verstappen of Hamilton's pace.

Russell goes seventh with a 19.005, around half-a-second down on Raikkonen.

The Briton complains that his pedal went long into Turn 1.

PBs in all three sectors see Norris go fifth, but he and the team will have expected better.

Hamilton looks set to improve but a mistake in the final chicane sees him back off.

Ricciardo goes sixth (18.582) as Raikkonen reports that he has a puncture.

Norris is off and in the gravel at Turn 10, however he is able to extricate himself.

Relay suggests he carried to much speed into the corner.

Perez goes eighth with an 18.606 as Verstappen heads out.

As he looks for a gap, Verstappen is told to go "easy on the tyres, right hand turns".

Despite a PB in the opening sector, Bottas fails to improve overall.

Verstappen goes quickest in S2, and despite some obvious oversteer he crosses the line at 17.835 to go quickest by 0.235s.

"Why do I have so much understeer in Turn 4," asks Gasly.

As the clock ticks down, the big surprise is that Raikkonen is still in the top ten, the Finn currently ninth with that 18.597.

"Keep an eye on the brakes, I feel like I'm losing them," says Russell.

So, as suspected, Red Bull was holding back, certainly in Verstappen's case, and while Mercedes is clearly right up there, so too Ferrari is looking strong.

McLaren will be a lot happier after that session, while AlphaTauri and Alpine appear to have lost ground.

Raikkonen dug deep and could well spring a surprise this afternoon, however it appears very much that the key to a good lap will be managing ones tyres in the opening sector in order to have enough in them for S3.