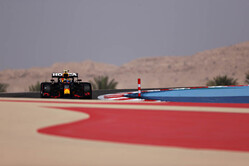 While everyone is excited to get an idea of what the pecking order might be, the fact is that this session, and indeed tomorrow morning's session, are totally unrepresentative of the conditions qualifying and the race will be held in, so don't get carried away by the lap times.

That said, this will be a good time for testing new components and drivers to further acclimatise themselves with their new cars... and in some case new teams.

Alonso has the honour of getting the season underway, the returnee followed by his teammate Ocon, Tsunoda, Sainz, Stroll, Giovinazzi and Leclerc.

While the Alpine pair are on hards their rivals are on a mixture of softs and mediums.

While post pit having completed an installation lap, Alonso posts the first time of the weekend (37.354), but this is soon beaten by his teammate who crosses the line at 36.284.

Little Yuki Tsunoda is unhappy with his mirror.

As Perez goes quickest (33.180) on softs, Hamilton heads out on the red-banded rubber. The world champion subsequently posts a 32.844.

Ocon reports a "lot of vibration", however he is firmly told to "stay out!"

"It feels like I'm being pushed from behind," reports Latifi, "it's not a wind thing, possibly a throttle thing," he adds.

Eleven minutes in and Verstappen and Bottas head out, both on softs. The Finn posts 32.709 to go top, despite a little moment which sees him run wide, as the Red Bull driver goes quickest in the first sector. At the line the Red Bull driver stops the clock at 32.591, to go top by 0.118s.

The Aston pair head out, again both are on the softs. Vettel posts 33.954 to go seventh, while teammate Stroll goes eighth, 0.033s off his teammate's pace.

Quickest in the first two sectors, Hamilton crosses the line at 32.214.

Still unhappy with his vibrations, Ocon is told he will simply have to "manage" the issue.

After 17 minutes, all bar Sainz, Giovinazzi, Leclerc and the Haas pair have posted times.

At which point the Maranello pair head out, Leclerc posting 32.904 to go fifth and Sainz going eighth with a 33.557, again both are on softs.

"Can you give me the wind direction," asks Stroll. "Wind at the moment is non-existent," he is told.

New season but Kimi remains just as grumpy, telling his engineer not to talk to him when he is busy.

As Hamilton heads out on another set of fresh softs, Norris goes quickest in S1. As the McLaren driver continues to set a strong pace, it appears that Mercedes has changed the rake on Hamilton's car.

Alonso switches from the hards to softs. Currently the Spaniard and his teammate are propping up the timesheets.

Vettel improves to seventh with a 33.157, like Hamilton he is on a fresh set of softs.

At which point it is pointed out that Hamilton and Vettel were not on fresh softs rather it was misinformation from the live timing. Again.

Gasly reports understeer at a number of corners.

Bottas goes top with a 31.692 as Ocon finally heads out on softs.

Vettel admits that his practice start was "very poor", and in the "wrong place", "I don't know why," he adds.

Verstappen goes quickest in the first two sectors, the Dutchman finally crossing the line at 31.394 to go top by 0.298s.

"F***, the last corner," moans the Dutchman, a minor error having deprived him of being quickest in all three sectors.

Of course, some will already be convincing themselves that we now have some semblance of a pecking order, but nothing could be further from the truth. That said, it does appear to be Red Bull and Mercedes at the sharp end, with Haas and Williams at the other.