The clock is ticking, admits Binotto 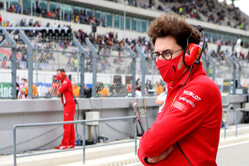 Ferrari boss, Mattia Binotto admits that he is running out of time in which to lift Ferrari from its current position.

In his first season as team boss at Ferrari, having replaced Maurizio Arrivabene, Mattia Binotto effectively picked up where his predecessor had left off, the Maranello outfit finishing runner-up to Mercedes for the third successive season.

Though much was expected of the team in 2020 it was soon clear that the effects of the investigation into its 2019 engine, combined with a disastrous aero package had left the Italian team struggling, while a car that appeared to be built around Charles Leclerc, at a time Sebastian Vettel had already been told he was no longer needed, hardly helped the situation.

However, even taking all this into account, few would have predicted that the Italian team would finish sixth in the constructor standings, narrowly holding off AlphaTauri, amassing just 131 points compared to the 500-plus of the previous three seasons, as it recorded its worst finish since 1980.

While much of the criticism was directed at Binotto (and Vettel), others pointed to the fact that the Italian's expertise was in the technical side of the team, and that he had been distracted by the politics of his role as team principal.

Though Ferrari has kept faith in him, as the team prepares for the new season, Binotto admits that the clock is ticking, and that while the team is not following its usual route at such times by 'reorganising', he is aware that he has limited time in which to resolve the situation and prove himself.

"I know that my time is not infinite, certainly," he added. "I am pretty aware of the fact that as a team we need to do well and myself as well as principal to do well in the next seasons.

"Overall, it was a very intense, dense season," he said of 2020, a year in which a Ferrari driver failed to score a single win, "difficult for many aspects, where our performance was inadequate..

"Finishing sixth in the constructors' is very bad as since 1980 that had not happened. But it's a season where I think we invested a lot in the future.

"We are trying to create the solid foundations which are required to become very competitive and hopefully to open a new cycle for the future."