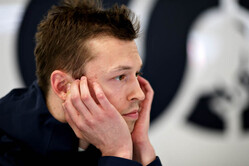 To use the term 'roller-coaster' when describing Daniil Kvyat's career in F1 would not be an exaggeration.

After joining Toro Rosso in 2014 he was subsequently promoted to the 'big team', Red Bull a year later. Subsequently dropped by Red Bull he returned to Toro Rosso only to be dropped by the Faenza outfit also. Then, after a year a development driver with Ferrari he was recruited by Toro Rosso once again.

In the words of the 70s TV comedy Soap... "Confused? You won't be..." Indeed, even the Russian finds it hard to keep up with events.

"I think my career in F1 was extremely fast," he told reporters in Abu Dhabi, "like everything happened so fast sometimes.

"After my first stint in F1 I didn't even understand really what happened," he continued. "I came in after GP3, so I missed the step before Formula 1… not missed, but that was a decision that was taken at the time.

"I went to Toro Rosso, had a strong year in Toro Rosso at the time and then immediately promoted to Red Bull Racing after one year. Then I also had a strong season with Red Bull there. Then we all know what happened. And then I had a couple of tough years.

"I think I always lacked a bit of experience in F1 actually, because everything happened so fast."

Indeed, during those "couple of tough years" there serious concern in the paddock over the Russian's mentality in the wake of his treatment by the Red Bull teams. Consequently, on returning to the fray last year, the Russian adopted a different approach.

"When I came back last year in 2019 I just took a very different approach," he admits. "Not that I forgot everything what I've been doing before but I just started from a very fresh page in a way a bit like a rookie again.

"I managed to learn new things and also this year I managed to feel a lot of progress," he added. "I think, all in all, the last two years were very competitive."

Asked about the current situation with AlphaTauri where Yuki Tsunoda appears to be a shoo-in, Kvyat admitted: "I don't know why it takes so long for some sort of news to come out.

"We've had some preliminary chat, I would say," he added, "but I think soon you will find out anyway, and it's better this question is addressed to Helmut."

Asked if he would consider a reserve driver role, as he had with Ferrari, he said: "My manager Nicolas Todt, he's talking a lot about considering many options, we are in touch all the time.

"I am open to many things," he added, "and of course I would consider this as well. But first, I want to finish the season and then I will start taking decisions. In case I wouldn't have a seat for 2021, I want to do my best to come back to Formula 1 in 2022.

"We will see, many questions to ask and many options and interesting opportunities, and I just want to finish the year because I'm having such a good rhythm now in this second half of the year and I just want to give my best to the team in this last race of the year, and then we will start to see more on the options.

"I think, ideally, if I'm not in the sport next year in F1, ideally 2022 would be the logical year to come back," he insisted. "Because there are new regulations, the team needs experience and I can assure you that actually experience is quite important, especially when new regulations come into place and, of course, I would be looking to come back, because I have a lot to give to the sport."