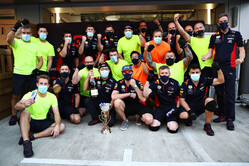 Max picked up another top-two finish as both Aston Martin Red Bull Racing and Scuderia AlphaTauri can celebrate double-points finishes in the Russian Grand Prix.

For the first time since last year's Monaco GP, all Honda-powered cars finished in the points and Max's second place means that Honda has now finished on the podium 20 times in the current hybrid-powered era.

After a stunning qualifying performance, Max was slightly slow away on the dirty side of the grid and dropped to fourth on the opening lap but regained third before an early Safety Car period interrupted matters. The Safety Car was required after Carlos Sainz crashed at Turn 2, and Alex - who had to start from 15th due to a gearbox penalty - was shuffled to the back of the field as a result, opting to pit for hard tyres after starting on softs. Pierre made good progress at the start while Daniil started on hards and was able to run long in the first stint. After Pierre pitted for hards on lap 18 and Max on lap 25, Daniil was running third on the road before Max overtook him two laps after his pit stop, with the Russian extending his first stint to lap 30 before switching to mediums.

Max rose to second place behind Valtteri Bottas as Lewis Hamilton had a ten-second time penalty and was well adrift in third, meaning the Dutchman had a comfortable run to the flag and scored Red Bull's first podium in Russia. Daniil's stop saw him emerge in eighth place ahead of Kimi Raikkonen, with Pierre struggling to pass the Finn. The difficulty in overtaking was highlighted as Daniil quickly caught Esteban Ocon but could not find a way through and had to settle for eighth place. Pierre ended up two-stopping as AlphaTauri tried to take advantage of a brief Virtual Safety Car period to switch to a new set of medium tyres with 11 laps remaining and he had to overtake Alex and Lando Norris to get back up to ninth, finishing directly behind his team-mate.

Red Bull committed to a two-stop race early and Alex made a second stop for medium tyres on lap 27 before fighting back through the field, overtaking multiple cars - including an excellent move around the outside of Antonio Giovinazzi at Turn 13 - before getting Norris late on for tenth place and the final point.

Toyoharu Tanabe, Technical Director: "It was a good day from a Honda point of view, with four cars in the points for the first time since last year's Monaco Grand Prix. That is particularly satisfying after we had experienced some reliability issues in the last couple of races. Max and Aston Martin Red Bull Racing delivered a good performance to split the Mercedes and finish second. After starting 15th due to a gearbox penalty, Alex made his two-stop strategy work to bring him a valuable point for tenth place. Scuderia AlphaTauri had a strong race, with both Daniil and Pierre getting some good overtaking moves on their way to eighth and ninth respectively. We now return to Europe and the Eifel Grand Prix in Germany in a fortnight. It will be the first time we have raced at the Nurburgring in this hybrid era, so we will be doing plenty of simulation work in preparation for it."