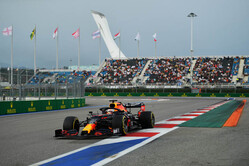 Max will start from the front row, for the first time since Austria, after an impressive qualifying performance in Russia as three Honda-powered cars made it into the top ten.

All four cars safely advanced through the first part of qualifying, but the second session was interrupted by a red flag when Sebastian Vettel crashed late on, leading to a dramatic finish. Max, Alex and Pierre all got through in the hectic final moments of Q2,, with Alex jumping up with his final lap at the chequered flag.

Unfortunately Daniil was one to fall foul of all the late movement after the session restarted with just two minutes remaining, ending up 12th and only 0.053s away from the top ten. Daniil will at least have a free choice of tyres for Sunday's race, giving him more strategic freedom, while Alex and Pierre are on the Softs they used to set their time in Q2.

Unusually, although Max was running Softs right at the end of Q2, the team instructed him to abort the lap, as his previous best, set on the Medium tyre, was good enough to get him into Q3, therefore he will start the race on the Mediums. In Q3, Max was provisionally third on his first run and then timed his final lap excellently to pick up a tow towards Turn 2 and enjoy clear air after that to split the two Mercedes drivers and secure a place on the front row.

Pierre and Alex were closely matched throughout qualifying and had their own private battle, with Pierre coming out on top by just 0.008s as they will line up P9 and P10 respectively.

Toyoharu Tanabe, Technical Director: "Max produced an excellent final lap to secure a place on the front row of the grid for tomorrow's Russian Grand Prix, equalling his previous best season's qualifying in the Styrian GP. It is also Aston Martin Red Bull Racing's best ever qualifying at Sochi. Q3 was very close and Gasly and Albon found themselves ending up ninth and tenth. Nevertheless, we got three cars into the top ten.

"It was unfortunate for Daniil that, at his home race, he missed out on Q3 by just 0.05 seconds because of the very chaotic final moments of Q2 caused by the red flag. Given the grid positions of the Honda-powered cars and our race pace during free practice, we should expect all of them to be in the points. With Max starting on the Medium tyre and the pole man starting on the Softs, we could see a very interesting battle at the front."