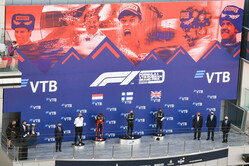 Just as he did in 2017 - his first Formula 1 victory - Mercedes driver Valtteri Bottas won in Russia from third on the grid. The Finn took the lead after his team mate Lewis Hamilton served a 10-second penalty during his pit stop. Bottas on Yellow Medium stopped 10 laps later, switching to White hard tyres.

Red Bull's Max Verstappen, who finished second, used exactly the same strategy as Bottas, making his sole stop a lap earlier. They were the only drivers who qualified in the top 10 of the grid to start the race on the Yellow medium tyre.

Mercedes driver Lewis Hamilton, who finished third, ran a soft-hard strategy, but his tactics were dictated by Q2 yesterday (when he set his best time on the soft) and having to serve his penalty during the race. He rejoined in P11 and made his way back up to the final podium.

Three drivers (McLaren's Lando Norris, Red Bull's Alex Albon, and Williams driver George Russell) took advantage of a safety car on the first lap to change onto the hard compound. Only one of them - Norris - attempted to get to the finish on this compound, but was forced to come off them in the closing stages and switch to medium, after 46 laps on the same set of hards.

Daniil Kvyat (AlphaTauri) finished his home grand prix in eighth, as the highest placed of just two drivers to start the race on the hard compound. The other, Alfa Romeo's Kimi Raikkonen, completed a 35-lap opening stint on this tyre.

Mario Isola: "On a hot day in Sochi, with ambient temperatures in excess of 30 degrees, we saw a variety of strategies, as a result of bringing compounds that were a step softer than last year. In the past, Sochi has been mainly a one-stop race, and this was generally the case again but with all three compounds coming into play as part of the different strategies. Managing thermal degradation was key, especially on the soft, but we also saw some particularly long stints on the hard. Congratulations to Valtteri Bottas and also to Mercedes - which keeps up its unbeaten record at the Russian Grand Prix."