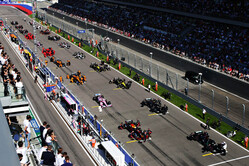 Should Ross Brawn be reading this, we have a few words of advice.

Back in the day he was a regular, he even thanked us once while running his own team after we tipped him off regarding some technical pictures which had been offered to us.

Now he's with F1 however, and the inhabitants of F1 Towers do not like us, in much the same way they don't like Christian Sylt.

They are not happy with the fact that we don't tow the party line or point out errors, requests for comment are ignored and we are even refused official press releases.

Anyway, as Ross continues to ponder ways to spice up the sport, not least with reverse grid, why not try reverse GP weekends.

By that we mean make Friday the big day and Sunday the afterthought, for at least that was drivers like Valtteri Bottas would have a cat in hell chance of beating Mr Hamilton.

On Friday, as is the norm, Valtteri set the pace - and what a pace it was - and then, despite everything thrown at him in qualifying, Mr Hamilton did what he always does, dominate.

While we're at it Ross, as technical boss of the sport, is it possible that you could make the cars just a little bit less bulletproof?

From 9 races this season, ignoring accidents, there have been 17 retirements. When you consider that one of these was due to a loose wheel and another two due to 'accident damage', that means that from 178 starts there have been just 14 DNFs due to engine or gearbox issues, brakes or electrics. Ye Gods, back in the day you could expect 14 retirements in one race.

All that aside, on paper today's race could be a bit of a thriller, should the pieces fall into place.

First off we have that half-mile (800m) drag race to Turn 2 - Turn 1 being a mere blip en route - which offers Max Verstappen (and Valtteri) the best chance of getting ahead of Hamilton. Of course, the Briton - following his qualifying nightmare - starts on softs, while his teammate and Verstappen start on the mediums.

However, just behind these are Perez, Ricciardo, Sainz, Norris and Gasly, who will be only too keen to profit from any mistakes ahead, assuming that don't in fact become the problem.

Other than being the best overtaking point on the circuit, Turn 2 is also where a number of drivers, including Hamilton, have been caught out by the crackdown on track limits, so caution will be the key.

Other than track limits, which are also being closely monitored in the final corner, the dusty and bumpy track surface has been catching drivers out all weekend, hence the number of incidents, be it crashes for Sainz, Latifi and Vettel, spins for just about everyone or mere excursions through the run-offs.

Adding to the grip issue is the fact that this year there are fewer support races, which is why from the outset drivers have been complaining.

Over enthusiasm, coupled with a dose of stupidity, was the root cause of this morning's F2 crash at Turn 3, which, if nothing else, should serve as a warning that this is a circuit that will bite back if you taunt it.

Thankfully, this means that, unlike some races, the result will not be decided at the first corner, especially when you factor in the tyre strategy of the three main contenders.

New gearboxes for Albon and Latifi overnight mean that both drivers incur 5-place grid penalties, dropping the Thai driver to 15th on the grid and the Canadian from 19th to 20th.

In terms of tyre strategy, the quickest is to start on the softs then switch to the hards after approximately 12 laps. Just as quick but very marginal on wear is softs for 14 laps and mediums for 39 laps. As usual, this can be done the other way round.

Slightly slower is a medium-hard one-stopper: mediums for 22 laps and hards for 31 laps.

Finally, the quickest two-stopper will involve two stints on the softs of 12 laps and one on the mediums, possibly running the medium in the 29-lap middle stint.

Of course, should Hamilton win today he will equal Michael Schumacher's record of 91 Grand Prix wins, a feat that just a few years ago seemed unimaginable. However, whether he does it today or next month, the Briton is clearly cruising towards his seventh title, equalling the legendary German is that achievement also.

At the other end of the grid, Kimi Raikkonen, who has lost none of his fire, today equals Rubens Barrichello of 322 starts, and to think that it wasn't that long ago Max Mosely deemed the Finn to young and inexperienced for F1.

The pitlane opens and one by one the drivers head out... and Hamilton is already in trouble, the Briton under investigation for performing a practice start outside the designated area.

Other than Verstappen and Bottas, Leclerc, Stroll, Russell, Vettel, Grosjean, Giovinazzi, Magnussen and Latifi start on mediums. The rest are on softs, including Albon starting from 15th, bar Kvyat and Raikkonen who start on hards.

They head off on the warm-up lap. All getting away.

They're away. Hamilton gets away well, as do Verstappen and Bottas, however the Finn crucially gets ahead of the Red Bull on the run to Turn 1.

As Verstappen harries the Finn, he in turn is under pressure from Ricciardo, and Turn 2, as Bottas attempts to go around the outside of Hamilton, Ricciardo has the inside line on the Dutchman.

Bottas runs a little wide as he seeks to pass Hamilton, while Verstappen misses the corner completely as does Sainz further back.

However, while the Dutchman rejoins the track correctly the Spaniard clips the barrier and bounces across the track.

"I made a mistake, I'm really sorry," says the Spaniard.

Norris, who lost a heap of positions after being bogged down at the entry to Turn 2, runs over some debris from his teammate's car, and expresses concern that there could be damage.

Verstappen makes short work of Ricciardo, while further back Stroll spins after getting a tap from Leclerc. The Racing Point appears to be out of the race.

At first the yellows are waved, and then the safety car is deployed.

Albon pits at the end of lap 1, as do Norris and Russell. All three switch to the hards.

Behind the safety car, Norris reports "something is not right".

"I've got some flat-spots," warns Magnussen, "they're not terrible, but they're there."

The safety car is withdrawn at the end of lap 5.