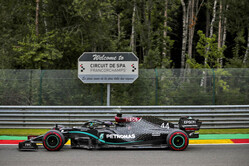 While there was lots and lots and lots of rain yesterday and evening and into the night, it is dry this morning, indeed the sun is attempting to break through the clouds. Nonetheless, this is the Ardennes and we know from experience that anything can - and usually does - happen in terms of the weather. Indeed, there is a 20% chance of rain over the next sixty minutes.

Max Verstappen was the pace-setter yesterday afternoon, and while the youngster and his team are playing down their chances of pole they are clearly very much in the mix.

That said, few would bet against one of the Mercedes drivers taking pole later today, but as we know there are no points on Saturday and heading into the race Max must be considered a very strong contender.

Teammate Alex Albon had a good day also, the cat-loving Thai youngster needing a good result this weekend if only to give himself a much needed confidence boost.

As good as it was for Red Bull however, it was truly dreadful for Ferrari, with Charles Leclerc and Sebastian Vettel well down the order in both sessions. Sadly, at a track so demanding of power, things are unlikely to get any better.

The lights go green and Magnussen is first out... he needs to be, like his teammate he had around just 30 minutes of running yesterday due to engine issues.

Norris is next out, followed by Grosjean, all three are on mediums.

As Magnussen begins his first flying lap, Kvyat, Gasly and Sainz head out.

The Dane posts 1:45.984 as his teammate reports that his KERS is not charging. The Frenchman subsequently posts 46.306. While Magnussen subsequently fails to improve, Grosjean posts 46.233 as the pair enjoy a track devoid of all other cars.

As the Haas pair continue, despite the absence of any other cars they are running just a few feet apart, suggesting that they are practicing tows for this afternoon.

After 6 laps the pair pit and the track falls silent... other than the pitter-patter of a few spots of rain.

Twenty minutes in and Norris breaks the deadlock, as he heads out he is followed by Sainz, Albon, Russell and Latifi.

"Light rain," Sainz is warned as suddenly there are 16 drivers on track. Most are on mediums, though a few are on softs, while the Points are on hards.

Verstappen heads out on softs.

Kvyat improves as does Russell, as Vettel begins to slide down the timesheets.

Albon is clearly unhappy with his brake bias.

"The brakes are poor," reports Kvyat.

On-board with Vettel one can see how much the German is struggling with his car. That said, 1.8s off the pace, Leclerc can't be finding it easy either.

Fourth quickest driver, Perez, though 0.793s off the pace, set his timer on hards, while the three ahead of him were on softs.

Verstappen heads out on a set of fresh softs, as Raikkonen, who has yet to post a time, heads out also.

It continues to drizzle, but no rain of real significance at this point.

Hmm... Raikkonen is back in 20th, so clearly his time must have been deleted.

Indeed it was, he exceeded the track limits at T19.

Once again the track falls silent, and with 13:00 remaining it is clear the drivers are looking to head out for one final burst of activity.

That said, judging by the amount of activity in Magnussen's garage the Dane won't be coming out anytime soon. That's a real blow for the Haas driver, who had improved to seventh with a 44.841.

With just under 9 minutes remaining, the pitlane bursts into life, and in no time at all there are 17 drivers on track, all sporting fresh softs. As the stragglers finally head out, only Magnussen appears to be missing.

Gasly is warned of a "little more gusty wind".

Ocon heads the snake of cars, which has formed a high-speed traffic jam at the final chicane.

In clear air, Ocon goes purple in S1. He maintains a strong pace in S2, finaly crossing the line at 43.485 to go top.

Stroll goes fourth, but is demoted when Ricciardo improves.

Due to the traffic Bottas aborted his lap, while Leclerc can only manage 16th (45.147).

A number of drivers, such as Verstappen, abort their laps as the teams continue this shambolic strategy.

Vettel can only manage 19th (45.420), but moments later is demoted when Giovinazzi improves to 45.190. This is beyond embarrassing for Ferrari.

The shambles of the final runs means that we have yet to learn the true pecking order, but one thing we do know is that the Ferrari pair will be hard-pressed to make it through Q2.