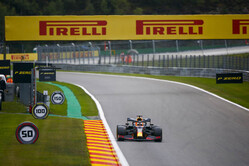 Mercedes was fastest in the morning session courtesy of Valtteri Bottas, while Red Bull and Max Verstappen were quickest of all in the afternoon: seven-tenths of a second faster than Bottas's FP1 time. In both free practice sessions, the P Zero Red soft compound was used to set the best time.

Conditions were cool all day, with some drops of rain as well: although not during any of the Formula 1 sessions. These cool and humid conditions, typical of Spa, are expected to remain for the rest of the weekend.

All three compounds were sampled during free practice, with each set to play a valid role in the race strategy on Sunday.

Other stand-out performances in FP2 include Daniel Ricciardo, who was second for Renault, just behind Verstappen, and Alex Albon - fourth in the other Red Bull.

Mario Isola: "With a softer compound choice here compared to last year, the work today mainly consisted of assessing the performance of the soft, to see how it could fit into the overall race strategy. With Spa being the longest lap of the year, the differences between the compounds are magnified and the difficulty of putting together a perfect lap increases. Conditions today were tricky but quite normal for Spa, with ambient temperatures consistently under 20 degrees centigrade and a track made slippery by some light rainfall, but all three compounds still offered performance in line with expectations and this weather seems set to be representative of the rest of the weekend. We're seeing a bigger time gap between the medium and soft compounds than anticipated so far, which will clearly have an effect on qualifying strategies tomorrow - making it harder to get through Q2 on the medium."