Norris visited specialists in UK over back pain 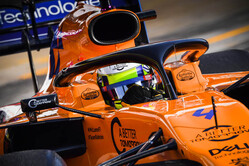 Lando Norris has revealed that he visited specialists in the UK following the back pain that plagued him throughout the Styrian Grand Prix weekend.

Though there were no signs during the opening race weekend at the Red Bull Ring, shortly after last weekend's practice sessions got underway the youngster began to experience back pain.

Such was his discomfort that his team altered his run plan to help alleviate the pain.

Though he drove another sterling race, finishing fifth following a bravura effort on the last lap that saw him pass both Racing Points, thereby taking third in the driver standings, the youngster was still in pain, especially in the high-speed corners which are a feature of the circuit.

Speaking to reporters ahead of this weekend's race, Norris revealed that during the break he returned to the UK to seek specialist help.

"I went back to the UK in the last few days - remaining in my bubble - to go and see some specialists and get scans and so on," he said.

"We diagnosed pretty much what the problem was and I'm feeling better," her continued. "It's not something that's going to heal completely overnight but I'm much better than what I was last weekend. It was just bruising from being out of an F1 car for so long basically and then getting back into it and going straight into a race weekend, doing so many laps. It wasn't something I could really prepare for or know about until after we did the first weekend.

"Obviously we had a few days off in between," he added, McLaren, due to the fact that it didn't have any suitable power units, being one of the only teams not to carry out a filming day or test ahead of the season opener, "but it hit my body a few days later and I was just a bit bruised."

"It was a bit of my seating position and the steering position," he said. "Again, just for being out of it for so long, we did the seat fit and so on before we even went back to Austria.

"Having just put on so much muscle over the break, I was just a bit out. I was slightly shaped differently in my seat, so I had to change a few pads around and a bit of my position and so on, which could have been a bit of a cause and a bit of a lead for it.

"I'm alright for now. It's hard to know until I'm back in the car and pushing it to the limit again but for now everything is good."