F1 must be "incredibly responsible and enormously responsive" urges Williams 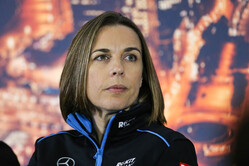 Despite the assurances from Australian race officials and F1 Towers that the opening races of the 2020 season will go ahead as planned, the fact is that if push comes to shove the final decision will not be theirs to make.

At a time more events, sporting, commercial and otherwise are postponed or cancelled, even the Tokyo Olympics are now under threat, such is the unpredictability of the virus and its global impact.

Speaking in London, as her team prepares to head down under for the opening round of the season, and at a time restrictions have been announced in Vietnam that cast serious doubt on the participation of Ferrari and AlphaTauri in the country's maiden Grand Prix, Claire Williams has said that the sport needs to be "incredibly responsible and enormously responsive".

"It's an incredibly serious situation," she admitted. "Being a global sport travelling around the world with thousands and thousands of people - and that doesn't take into account the number of fans travelling as well - there's so much movement that we've got to be incredibly responsible and enormously responsive as well.

"At the moment it is a moving target," she continued. "We're clearly keeping in touch with the relevant authorities, with F1 as well, and taking the guidance as it's coming. But it is changing literally by the hour.

"It's quite a difficult management piece, when you're thinking about F1 and the number of personnel that you're taking to a race. Plus the amount of kit that you're putting on air freight and sea freight, and the cost involved in all of that.

"We want to go racing at the end of the day," she insisted, "but we've got to make sure that we keep our people safe in doing that.

"We will just continue to take the guidance as and when it comes through."