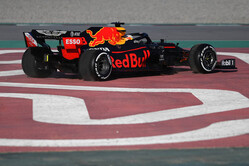 Though Christian Horner may well be delighted at the reliability of the Honda power units, the one possible fly in the ointment as far as the RB16 is concerned is its handling.

Though there were no significant reliability issues, both Max Verstappen and Alex Albon had more than their fair share of spins over the course of testing, especially when ramping up the pace, leading to suggestions that the RB16 is proving to be a bit of a handful in terms of handling.

Meeting the press as testing came to a close, the Dutch youngster initially made light of the matter. "I knew I was going to come here today so I said, 'we have we need something to talk about, so let's give it a few spins out there'," he joked.

"It's just something which happens," he continued. "I want to try the limits of the car, and I think that worked pretty well. By having a few spins I knew where the limit was."

On social media (groan), fans expressed concern at the number of spins and offs. When this was pointed out to Verstappen he replied: "They don't drive the car, so they don't know.

"I'm not worried at all," he insisted. "That doesn't mean that we don't have to keep pushing and improving.

"We had good preparation. I think that's very good from our side, and I hope it's enough to be competitive in Melbourne. We tried basically everything we wanted to try over all the days together, so I'm very pleased with that.

Asked about the final hour of testing when he finally got to show what the RB16 can do, albeit on the C4 tyres, he admitted: "It's a lot more fun to drive a car like that, after all the time doing just a lot of laps in a row.

"It all seemed to be working quite well," he smiled. "We were not running the softest compound, but still I think the balance of the car was good."

"It's just pushing really," added Albon, when asked about his spins, "just trying to see what the car can do. The wind's always up and down as well," he added, "So it's not just Max and I. I think there are a lot of spins through the paddock."