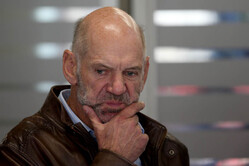 At a time F1 is looking to rewrite the record books as Lewis Hamilton targets a seventh drivers’ title and Mercedes an equally impressive seventh successive constructors' title, let's not forget Adrian Newey, whose designs for Williams, McLaren and Red Bull have won ten Constructors' Championships.

Seen deep in thought in the Red Bull garage at Barcelona yesterday, while looking at ways to enable Max Verstappen and Alex Albon to challenge the Silver Arrows, Newey is also at work on the Austrian outfit's 2021 contender.

2021 is when everything changes, when the sport's owners finally begin to have their say, having pushed for regulations that are intended to not only level the playing field but to make the cars look more exciting, thereby hopefully attracting a whole new audience.

However, at a time an exciting innovation from Mercedes is dominating the headlines, the sport's managing director, himself responsible for a number of championship winning cars, appears to be seeking to stifle such innovation.

Indeed, just weeks after Ross Brawn revealed that the sport is seeking to close the sort of regulation loopholes he was so keen to exploit before turning gamekeeper, it is revealed that Mercedes' exciting dual axis steering system is already banned for next year, even though the authorities have given no real reason. After all, if it is illegal next year, how come it isn't in contravention of the rules this year.

While some opine that the 2021 regulations present a great challenge, Adrian Newey isn't happy, admitting unease with the philosophy behind the rules and the manner in which they have been forced on the sport.

"In many ways I look forward to regulation change," he tells iNews, "because it's an opportunity to try to understand new things.

"What I don't like," he continues, "is the general trend in successive regulations to become ever more restrictive.

"What was very nice about the last major change back in 2009 was that it wasn't more restrictive. But these new ones for 2021 are very restrictive and prescriptive. And I think that is an awful shame. It makes it a little bit GP1 which is not what I think Formula One should be."

Though he doesn't name names, Newey says he is not alone in feeling this way, a sentiment which is natural when one considers that a sport that has always been at the cutting edge of technology is now in danger of being over prescribed in the name of entertainment, the show.

"It's been pushed through regardless of what people think," says Newey, "whether it's good for the sport or not, only time will tell."