According to the Grove outfit, the FW43 is an evolution of the FW42, with much of the development work carried out throughout 2019 feeding in to the design of this year's car.

"This year marks a fresh start for the team," said Claire Williams. "We have spent time addressing our areas of weakness and have ensured that we have the right people, structures, procedures and resource in place to deliver competitive race cars.

"We are all committed to re-building Williams and returning the team to competitiveness," she continued. "As such, our 2020 campaign is about making progress. The fighting spirit is still very much alive, and this year, everyone will continue that fight until we get back to where we want to be."

"The team at the factory have been working incredibly hard on the development of the car," added Design Director, Doug McKiernan. "We have paid significant attention to understanding the problem areas of the FW42 and we have carefully chosen parts of the car to develop, those that would give us the most performance for the resources we have. The main concept behind the FW43 is that it is a continuous development of the FW42, with no fundamental concept changes to the layout. The most important indicator that we are on the right path will be the level of correlation we have between the tool kit we use to design the car and what the track data is telling us.

"There has been a healthy development rate in the wind tunnel, and we have found reasonable improvements in the cooling efficiency. The team has addressed the mechanical issues that affected it in 2019, these include the brakes and the overall weight of the car. We have made some good progress across these areas and will continue to focus on them during the season." 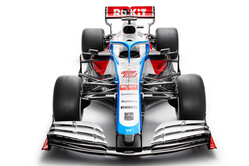 "The initiatives that we put in place to drive performance across all disciplines within the engineering department are evident in the design and development of the FW43," said Chief Engineer, Adam Carter. "It's been great to see the hard work starting to pay off.

"The decision to retain some of the core architecture of the FW42 means there has been less resource invested in developing new concepts, which in turn has rewarded the design team with greater bandwidth to optimise their work, evident in both packaging and component detail. By preserving some key parameters, it has allowed for an uninterrupted development programme within Aerodynamics in order to maximise the efficiency of the resources. As we head towards the pre-season tests and then onto the race season, the most important measure will be the progress relative to our peers, along with our intention of continuing our recent record of reliability.

"Later this week, we will be looking at our single timed lap pace, our long run pace and the feedback from the drivers to understand where we are and what we do next. We have teams, both at the track and back at Grove, that will be delving into all aspects that define that lap time during the pre-season tests to ensure we are in the best possible place ahead of the first race in Australia." 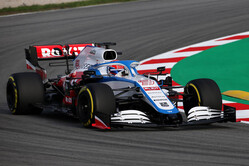 2019 was always going to be a watershed year for Williams, for it could either learn from the disaster of 2018 and climb straight back upon the horse, or continue to lose its way and possibly face the fate of numerous other championship winning teams that believed they were immune to the realities of failure.

Unfortunately, anyone hoping that 2018 was a mere blip in the team's fortunes was in for a major shock, for Williams, the most successful of British constructors in terms of team titles, not only finished bottom of the pile again, it scored just one point from 21 outings.

It was clear that there was a problem when the Grove outfit didn't reveal a date for its initial shakedown, those initial fears intensifying when the team missed the first two days of pre-season testing.

Though, courtesy of a Herculean effort by the crew, the car rolled out halfway through the third day of the test, ignoring its woeful pace, the big story going round the paddock was who was to blame. Days later it was announced that Paddy Lowe was on leave of absence, the former Mercedes technical boss finally cutting ties with the team in the summer.

Meanwhile, Kubica and Russell had to continue with a car that was a dud, exactly how much of a dud only becoming clear in Melbourne.

From the outset, both drivers complained of a serious lack of grip, the Briton subsequently admitting that the FW42 had a "fundamental" issue that would take months to resolve.

And thus began a season of absolute torture for all concerned, neither driver making it to Q2 over the course of the whole season, far less Q3. At season end, Russell's average qualifying position was 18.43, while his teammate's was 19.67.

It wasn't as if things got any better on Sunday, for the pair were regularly two or three laps down on the winner.

In a season of unparalleled disasters for what is widely regarded as one of the sport's true greats, the awfulness of it all was best summed up by events in Azerbaijan.

On his install lap in FP1, Russell ran over a loose manhole cover which badly damaged his car. Then, as if to rub the team's nose in it, as the badly damaged FW42 was transported back to the pits, the low level truck that was carrying it struck a bridge, and subsequently covered the car in oil. To compound the team's misery, Kubica subsequently crashed in Q1.

All this at a time the Grove outfit was already worryingly short on spares.

Once the team began to introduce updates - none of which appeared to have any significant effect - this kick-started behind the scenes shenanigans as Kubica complained that Russell was being given preference.

Later in the year, moments after Russell went off into the barriers after a wheel nut retainer failed in Sochi, the team called in Kubica to retire him. This prompted sponsor PKN Orlen to issue a statement citing a contractual breach, with Williams subsequently admitting that it retired the Pole due to "accident damage"... and also to save parts for future races.

On and on and on it went, the Grove legend a shadow of its former self, now almost an embarrassment to behold.

The team's sole point came courtesy of Kubica, who was promoted to tenth after both Alfa Romeo drivers were handed time penalties for receiving outside aid before the start of the German Grand Prix.

As expected, Kubica left Williams at season end, taking his sponsor with him (to Alfa Romeo), while Nicholas Latifi is promoted from his role as reserve driver to race driver alongside Russell.

While the signing of Latifi raised eyebrows, one only has to look at his father, Michael, who owns a £200m slice of McLaren, to see what might have influenced the team's decision, for in the days following the youngster's confirmation the team announced several new (Canadian) sponsors.

Though the team has announced a number of interesting changes to its technical team, the signing of Roy Nissany as "official test driver" does little to dispel the fear that Williams is a team in freefall, a team in line for extinction unless someone gets a firm grip.

That said, Doug McKiernan's admission that there are no "fundamental concept changes to the layout", and Adam Carter pointing out the team's "decision to retain some of the core architecture of the FW42", gives some cause for concern.