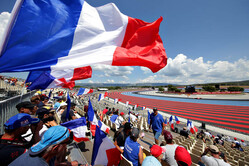 Boullier, who began his motorsport career with Spain's Racing Engineering, before joining DAMS to manage its A1 GP programme, became the CEO of Gravity Sport Management in 2008, while in 2009 he was appointed team principal at Renault which was part-owned by Genii Capital. The team subsequently became Lotus Renault GP and Boullier continued to run it until resigning in early 2014.

The Frenchman oversaw one of the worst periods in the team's history as it struggled with the new Honda engine and in mid-2018 he resigned. Six months later he was announced as strategic sports and operational advisor and ambassador for the French Grand Prix, and on Monday was confirmed as the event's managing director.

I am happy and proud to be more involved in this beautiful project that is the Formula 1 Grand Prix de France," said Boullier. "I look forward to continuing to contribute to the success of this great motor sport event on French soil.

"I would like to thank Christian Estrosi and the Grand Prix de France - Le Castellet for their trust," he added.

"Since 2019 the French Grand Prix team has already benefited greatly from Eric's advice and expertise," said the event's president Christian Estrosi. "Eric had already participated in the working group for the return of the French Grand Prix and I am delighted that he is now getting more involved in its organisation."

While France returned to the schedule in 2018 following a 10-year hiatus, its return to Le Castellet has not been without issue. Other than proving a nightmare for fans travelling to the venue, changes to the circuit's layout have compromised the racing, with last year's event widely considered one of the most boring in living memory.

In a bid to ensure that the racing is better this season, a number of changes are being carried out, most notably in S1 which includes the Verrerie complex and Virage de L'hotel.

Hoped for changes in the second and third sectors, including the infamous chicane on the Mistral Straight will not happen.