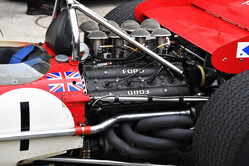 Purists had best look away now.

In November, the sport revealed its intention to have a net-zero carbon footprint by 2030, a move that would require all cars to be 100% advanced sustainable.

At the time, the sport's chief technical officer, Pat Symonds said that the move would mean major changes to the power units and also to the fuel used.

Speaking at the Motorsport Industry Association's Energy-Efficient Motorsport conference, the Briton revealed that the sport is considering the introduction of two-stroke engines that would run on eco-fuel.

"I'm very keen on it being a two-stroke,” he said, according to MotorSport magazine. "Much more efficient, great sound from the exhaust and a lot of the problems with the old two strokes are just not relevant any more."

It's understood the engines would still be hybrid, but powered by synthetic fuel.

"We need to look at what our future power units will look like," said Symonds. "At F1 this is what we are engaged in at the moment.

"It might be that the next power unit we produce is the last one we do with liquid hydrocarbons," he continued. "I think there's a very high chance that there might still be an internal combustion engine but maybe it's running on hydrogen.

"I certainly think that the internal combustion engine has a long future and I think it has a future that's longer than a lot of politicians realise because politicians are hanging everything on electric vehicles. There's nothing wrong with electric vehicles but there are reasons why they are not the solution for everyone."

Keen to dismiss the obvious fears that a switch to two-strokes would be a step backwards, those of a certain age recalling Sunday afternoons spoiled by noisy lawnmowers and evenings by noisy scooters, he said: "It's reasonably obvious that if you are going to pump that piston up and down, you might as well get work out of it every time the piston comes down rather than every other time the piston comes down. The opposed piston engine is very much coming back and already in road car form at around 50 per cent efficiency.

"Direct injection, pressure charging, and new ignition systems have all allowed new forms of two-stroke engines to be very efficient and very emission-friendly. I think there's a good future for them."

Much like the working group put together to create the 2021 aero regulations, Symonds is looking to set up a similar group for the proposed new engine formula which would be introduced in 2015 or 2016.

Whatever purists might think, the fact is that at some point or another the engine has to change. Already, a number of cities around the world have set dates by which time cars powered by fossil fuel will be banned.

The manufacturers are aware of the fact that currently F1 flies in the face of the trend in terms of the move toward electric that road cars are making.

It is almost inevitable that at some stage the sport will need to phase out the internal combustion engine, the only thing is when. The move to two-strokes powered by eco fuels may well be the first step.

That said, research presented at the conference suggests that electric racing cars could be responsible for two times the level carbon emissions of hybrids, due to the amount produced when building the batteries.

Nonetheless, listen carefully and you can hear Enzo Ferrari spinning in his grave.