Decision to remain is down to Gene Haas admits Steiner 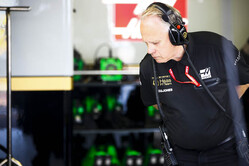 In many ways, finishing fifth - almost fourth - in 2018, was a poisoned chalice for Haas. For going forward, having almost been 'best of the rest', the challenge was to either retain that position or go backwards.

Sadly, it proved to be the latter.

While pre-season testing suggested that the American team might maintain its position, ignoring the disaster that was Melbourne (again), the team soon discovered that it had a fundamental issue which meant that the tyres only worked in the most miniscule of windows courtesy of the VF-19's aero.

Though the team sought to get on top of the situation, and following the introduction of a new package at Barcelona appeared to have done so, it soon became apparent that the issue remained unresolved.

Indeed, as the drivers tried split strategies and packages, Romain Grosjean even resorting to the aero he'd used in Melbourne, the American outfit, despite a strong start to the year, began to slide down the rankings, with team boss, Guenther Steiner admitting that the team had gone the wrong way and should have listened to its drivers.

Then there was the unmitigated disaster that was Rich Energy.

Little wonder that at a time the futures of Mercedes and Renault remain undecided, in the eyes of many, Haas is the most likely team not to continue beyond this season, a move given added weight by the decision to retain Grosjean.

Steiner admits that that the decision whether to continue is out of his hands and that it is team owner, Gene Haas who will decide if it is worth remaining in F1 or not.

"He's got a good enough understanding that if I tell him we can win in 2021, he might say 'he doesn't know what he's doing'. I would have to agree with him. It's not going to happen.

"But, as I said, there is still so many open issues here that at the moment I don't know if he should make a decision yet."