Symonds explains F1's ambition to be a leader in biofuel technology 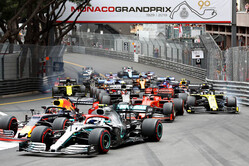 As the sport targets a net-zero carbon footprint by 2030, Pat Symonds, Chief Technical Officer at Formula 1, looks at a key aspect of the sport's plan - to become a leader in biofuel technology.

This week, Formula 1 yesterday announced an ambitious sustainability strategy, targeting a net-zero carbon footprint by 2030. Part of that plan involves reducing and eventually eliminating carbon emissions from the current internal combustion engine (ICE). How is that going to happen?
Pat Symonds: One of the key elements will be the fuel Formula 1 uses in the future. Currently, under Article 19.4.4 of the FIA's 2019 technical regulation for F1 a minimum of 5.75% (m/m) of the fuel must comprise bio&#8208;components. We want to go to 100% - that's the target. For 2021, we are looking to increase to 10% and the idea is to increase that over time.

When you take about bio elements and bio fuel, what exactly are we talking about?
PS: It is a word that gets bandied about quite a lot, so we prefer to use the phrase advanced sustainable fuels. At the moment the bio content specified in regulations is reasonably free but what has happened is that the fuel companies in F1 have largely ended up using a very similar product and it's quite expensive. So in 2021 we will move to 10% bio elements, but we're going to specify that it is an advanced sustainable ethanol, a very particular type of biofuel.

Also, it must be a second generation biofuel. What does that mean?
PS: First generation biofuels were largely made from food stock. Crops were grown - particularly in America - that could have been used for food, but instead they were used to make fuel. While the US could afford to do that because of its extensive land mass and its wealth, it wasn't generally felt that was a positive path due to the effect such crop growth might have on the food chain.

As a result, second generation biofuels are basically fuels that don't have a significant impact on the food chain. They either use food waste, the husks of corn for example, or biomass, for example forestry waste, or indeed household waste.

Finally, there are third generation biofuels, sometimes called the e-fuels or synthetic fuel, and without going into too much chemistry, these are the more advanced fuels. They're often called drop-in fuels because you can effectively just put them into any engine, without modification, whereas engines that run on extreme ethanol mixes, such as used in Brazil, require alteration.

The path to that is not completely clear at the moment but in partnership with the FIA and with the help of the engine manufacturers and the fuel companies, we are looking at the way forward. In fact, our next meeting on the matter takes place this week.

There will of course be some who would say that internal combustion engines are 'old technology' and that we should be looking at an entirely different energy source. Why are we pursuing further developments of ICE-related technology?
PS: It's certainly true that there is a move for light duty vehicles to move to electric powertrains, but the fact remains that over 1 billion of the 1.1 billion vehicles in the world fleet are powered by ICEs and there is great potential within that number to reduce carbon emissions globally.

Electric power is attractive, but it's currently still quite difficult to scale that up. With any of the technologies on the horizon at the moment an electric truck or an electric aircraft is not a particularly feasible product. So, there is still a case for having liquid hydrocarbon fuels in trucks and in aircraft.

However, what we cannot do is carry on digging those out of the ground, we're going to have to somehow synthesise them and that's what we want Formula 1 to explore and hopefully to lead.

How environmentally friendly are the fuels we're talking about?
PS: Because they are synthesised, they don't have some of the bad components found in fossil fuels. Sulphur, for example.

The sulphur content of fossil fuels has to be much lower now than it used to be, but when you synthesise a fuel, you don't need sulphur in it, so you just don't put it in. It can be a very clean fuel.

The products of combustion are the same, so you are going to produce oxides of nitrogen and you are going to produce particulates but a modern Formula 1 engine is very, very low on particulates because combustion is now so efficient, and that efficiency is entirely the product of Formula 1's ability to drive innovation in pursuit of performance gain.

As you say, Formula 1 is particularly good at fast-tracking R&D so is there a real contribution the sport can make to clean fuel development?
PS: There definitely is. The easy thing would be if we could produce these drop-in fuels, but we can't produce enough of it at the moment, it's at too low a technology readiness level, but I think that what we can do is we can show the world that there are alternatives to electric power and there are alternatives to storing electricity in heavy and, I have to say, somewhat dirty batteries.

Formula 1 didn't invent the hybrid, but Formula 1 showed what a hybrid could be and it moved people's perceptions of what a hybrid is capable of and I think we can do the same with new fuel technology and hopefully demonstrate that another viable alternative energy source is possible.

You also mention the pursuit of performance gains. That has always been the driver for technological advancement in Formula 1, so what's in it for teams this time?
PS: There absolutely is a performance gain to be had here. With the next Formula 1 engine, I think we will certainly be setting slightly different goals for it. With the 2014 engine, the idea was to limit fuel flow and that really pushed manufacturers to seek high combustion efficiency, though to be honest, I'm not sure anyone thought we'd get to 50%, which is quite remarkable. However, for the next engine, I think what we're going to say is that we want to target 60% total efficiency and then discuss what technologies can get us there.

When the next engine does come along, we have a chance to develop a real game changer, where you're tailoring the fuel and the engine together and that really does lead to some much more interesting possibilities.

You mentioned that the Formula 1 and the FIA are already talking with engine manufacturers and fuel companies. Are they on board with this strategy?
PS: Our ambitions are all aligned. It's early days and I don't think any of us have completely decided on the road map yet, other than this first move in 2021 to 10% but we are meeting regularly, and within the next few months we've got to look at what the road map is to a fully sustainable fuel. I think it's important to say that I don't think it will be easy, but anything of value requires ingenuity, commitment and the will to make a change. And if we can do it, I think there's another great contribution story from motorsport to the world at large.