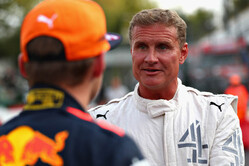 David Coulthard, has been elected as President of the British Racing Drivers' Club by members during the club's Annual General Meeting which took place at Silverstone Circuit. He takes over from Paddy Hopkirk, who committed to take on the role for a two-year period in 2017.

Coulthard has been a member of the BRDC since 1989 when he won the British Formula Ford Championship and became the first recipient of the BRDC McLaren Autosport Award.

Since then he has gone on to compete at the highest levels of motorsport winning the Macau F3 Grand Prix in 1991, joining Williams as a test driver in 1993 before becoming a full-time driver for the team in 1994, and going on to finish third in the World Championship in 1995.

Moving to McLaren in 1997, he scored 12 of his 13 F1 wins with the Woking team and was runner up to Michael Schumacher in the 2001 World Championship.

By the time he moved to Red Bull in 2005 he had achieved 13 F1 wins and 62 podium finishes. During his three years at Red Bull, he become the highest scoring British driver of all time with a total of 535 race points.

Since retiring as an F1 driver, the Scot has used his talents in the business arena and has started, and continues to remain involved with, a number of successful enterprises. In addition to his commentating duties, he has been a supporter of and ambassador for the W Series since its launch in October 2018.

During the AGM, BRDC Members also elected fellow-Scot, Dario Franchitti, as Vice President of the club in recognition of his achievements as a driver which include winning the IndyCar Championship four times, the Indianapolis 500 three times and the Daytona 24 Hours.

"I and my fellow board members are delighted to welcome David Coulthard as President of the BRDC," said John Grant, Chairman of the BRDC. "We are confident that, in David, we have a President who is not only a greatly talented racing driver but also a successful businessman with an enviable network of contacts in the motorsport world which, together with his experience, should be of great benefit to the club.

"I would also like to take this opportunity to thank Paddy for the enormous personal commitment he has given to the BRDC over the last two years in fulfilling the role of BRDC President, adding value to our Club that would not have happened without the immense energy and personal reputation he has brought to the task. I am delighted that he has agreed to become once again a Vice President of the BRDC.

"We also welcome Dario Franchitti MBE who deservedly becomes a Vice President of our Club and joins an illustrious line up of names that have competed at the highest level of our sport and made a massive contribution to the world of motor racing."